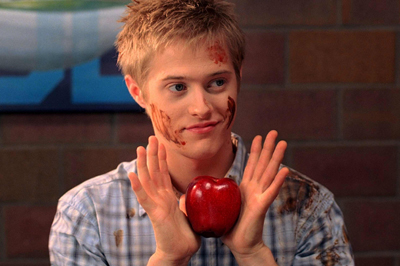 He’s smoking up the big screen later this month in HSM 3, reprising his role as Ryan Evans. But until then, catch cutie Lucas Grabeel in his hilarious, new film The Adventures of Food Boy when it lands on DVD October 7.

Lucas plays lead character Ezra, a high school junior known for his kooky food challenges placed by friends, and whose world is turned upside down when he discovers he has the crazy superpower of making food appear in his hands!

Can Ezra use his unique abilities to gain popularity amongst the school, or will he give up the food fight forever?

We chatted with Lucas and are spilling some of the yummy deets he dished for us about the film right here!

The superhero story
“The story centralizes on this character Ezra. He feels like he has his whole life planned out. He wants to go to college and be a lawyer or doctor, something set in stone. Then he finds out he has this superpower. He has food shooting out of his hand and so he has to make a choice. He is going to either live this life that is planned out and financially secure, or try to make a difference in this world and use his gift to do something extraordinary.”

Ezra, by the books
“We are very different. He’s a little nerdy and really cares about academics and furthering himself in the by-the-book kind of future. That’s just the exact opposite of what I did with my life. I graduated high school, packed up the car and drove out to L.A.”

Filming was cheap…
“Everyday was great because it was an awesome group of people who were really pushing everyone’s limits. We had so many volunteers who were literally working for nothing. And you would never know that by watching it. It had so much heart and dedication. Every day was an extremely fun day, and at the same time a lot of hard work. There wasn’t anyone there that was complaining because if they didn’t want to be there they could just leave. So it was pretty cool.”

…and quick
“We did the whole movie in three and a half weeks. There was one day when we shot 12 pages of the script. Usually, on a film set you do one or two, maybe up to five if it is easy stuff and we did 12! That was a long [day]. Eighteen hours.”

The food was real. No special effects required
“[The craziest thing I’ve ever eaten] was right there. I really ate it! We didn’t have the time or resources to go out and get anything fake. The only thing that wasn’t real was the blender  [scene] because I would have gotten sick. There was raw fish and crazy amounts of grossness in there. We switched that out for a chocolate milkshake. When you’re chugging frozen chocolate milkshakes for five takes, not only does your stomach get completely full but you’re having brain freezes. It was a tough challenge [but] you have to make it real.”

If Lucas could have one superpower it would be…
“To be a technopath. To have the power of controlling machines, computers, anything electronic at all. Make traffic lights work in my favor, ya know?”

…but for now he has some awesome hidden talents
“I can do tongue tricks and stand on my toes. I can run on my toes and jump on them, with all of my weight on one foot standing on my toes. I can’t do it on concrete, only on carpet. I need a little padding, but not much.”


WIN BIG!
Get your food fix with The Adventures of Food Boy. 5 lucky chicks will snag a copy of the DVD, signed by Lucas! CLICK HERE to enter. Hurry! The contest ends October 8.