Everything you need to know about the Georgia voting bill 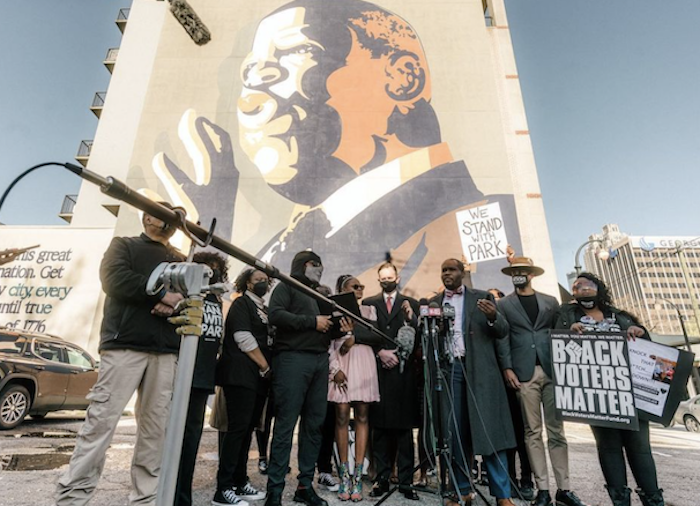 The GOP-controlled Georgia legislature passed a 98-page voter suppression bill last week that many experts have called an attack on the integrity of the state's electoral processes. The bill has been accused of specifically disenfranchising Black voters in Georgia, and some leading Democratic lawmakers have compared the legislation to the Jim Crow Era—the time following the end of slavery in the United States, when legislation discriminated against Black Americans.

The passage of SB 202 was motivated by unfounded claims of election fraud in the 2020 presidential election. Although there is no evidence of widespread voter fraud, Republican lawmakers have continued to push this narrative which has cleared the way for legislation that restricts the rights of voters in the name of "election integrity."

So...what exactly is included in this controversial legislation?

SB 202 makes significant changes to the way Georgia will manage its electoral process going forward. We've rounded up eight of the most high-profile changes includes in the legislation.

Alters composition of the state election board

The state election board will no longer be chaired by the secretary of state. This position, which is now non-partisan, will now be elected by the GOP-controlled state legislature, which gives Republican lawmakers more control over the electoral process.

SB 202 requires at least two Saturdays dedicated to early voting in each primary and general election, whereas only one Saturday was required before.

One of the most controversial elements of SB 202 is the restrictions placed on vote-by-mail measures. The bill shortens the period to request an absentee ballot, adds a new voter ID requirement to apply for a ballot and eliminates 300+ hours of dropbox availability compared to 2020. One positive change is that the bill establishes a minimum number of dropbox locations per county, meaning rural counties may have access to drop boxes in locations where they may previously not have.

Runoff elections, which were previously nine weeks after the general election, will now only be separated by five weeks. Overseas and military voters will have ranked-choice voting on their ballots.

The Georgia Attorney General is now allowed to maintain a hotline for voters to document illegal activity and allegations of voter intimidation. This hotline will allow the attorney general to determine which allegations need further intervention.

SB 202 goes so far as to criminalize delivering food & water to voters waiting in lines to vote. The bill also allows voters to make "unlimited challenges to another voter's qualifications" to vote in Georgia. This action might slow the work of election officials and could lead to legitimate voters being burdened with having to prove their eligibility, even if they did nothing wrong. An obscure conservative organization called True the Vote challenged the eligibility of over 360,000 voters in Georgia prior to the 2020 election runoffs. Although the courts blocked this effort, it serves as an example of what this bill could encourage.

SB 202 bans the majority of out-of-precinct provisional ballots. Critics believe this would disproportionately harm Democrats, as 70% of provisional ballots counted in the 2020 general and runoff elections were Democratic voters.

One aspect of SB 202 that most people agree on is the provision that allows the early processing of mail-in ballots. This year, it took pundits 10 days to announce a winner in the presidential race in Georgia. During this election, the state board of elections made an exception that allowed election workers to begin processing absentee ballots 15 days prior to Election Day. This law codifies this change and also mandates that election workers can not stop counting ballots once they have begun, which will lead to quicker turnaround times in future elections.

Each reason is cited by line so feel free to follow along with the actual text here: https://t.co/CGys8yVkzn #gapol #SB202 1/13

To put it simply, a lot.

As the legislation was being signed, police arrested Democratic State Representative Park Cannon for knocking on Governor Kemp's door and demanding to be present when he signed the bill. On April 7, the Fulton County District Attorney announced that Rep. Cannon will not be prosecuted.

Floods of CEOs and businesses have spoken out against the new voting restrictions, including Coca-Cola and Delta Airlines, two companies that call Georgia home.

Most controversial, however, was Major League Baseball's (MLB) decision to pull its 2021 All-Star Game from Georgia. While some have lauded the MLB for taking a progressive stance on voting rights, others have pointed out that it will be causing a loss of $100M in expected revenue for Georgia's Cobb County.

Keisha Bottoms, the mayor of Atlanta, issued an executive order on Tuesday that will implement "a series of actions to mitigate the impact." The order includes training staff to register voters and organize absentee and early voting.

Additionally, Fair Fight has promised to fight against this SB 202. The group has launched a campaign called "Stop Jim Crow 2," which outlines ways Americans can support democracy in the United States.

Do you feel passionate about protecting voting rights? Check out Fair Fight for resources on how you can help in your state.