So, who's gonna die in Pretty Little Liars' Halloween episode? (No spoilers!) 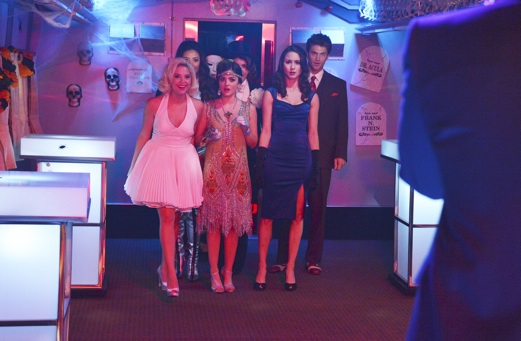 Ha! Like we would spill a secret that big. Maybe it’s just because we’re in the spooky spirit with Halloween just around the corner, but we simply can’t wait for the return of Pretty Little Liars this Tuesday, Oct. 23, for their special Halloween episode. OK, we were so excited, we actually caught it before it’s TV premiere.

Girls, this episode is creepier than ever. A Halloween party on a ghost train? Yes, please! Read on for a peek at why you should check out this very special episode when it airs on ABC Family this Tuesday at 8 p.m. ET/PT.

While the episode does involve a lot of partying, there are some serious moments. Garrett, the former cop who has a history with the Liars, begins to confess quite a few things to Spencer. Toby interrupts the conversation on the first try, but Garrett is finally able to reveal privately to Spencer details about Alison’s last hours before dying.

Yay, even more “A” info! In this special Halloween episode, we will also be given a glimpse at a new potential suspect for Allison’s murder. Could that mean another member of the “A” team as well? Who knows about this suspect, and who is unfortunately unaware?

We’re super duper excited about this one….Adam Lambert is guest starring! And not only does he perform two songs, including the dance anthem “Cuckoo,” but he has a bit of an acting debut as well. At one point, the ever-glamorous star chats up Aria before a spooky character steps in.

OMG, we are dying. Well, not literally, but someone major in the cast of Pretty Little Liars will be dying…in this episode! We can’t say who, as you know, because that would be no fun at all, but it very well may shock you. And remember, it’s one of the bigger characters on the show (how tragic)!

Are you tuning into the Pretty Little Liars Halloween episode? Who do you think dies? Blog about it, babes.