Feeling stressed? Us, too. This fantastical, fairy-packed read is the *perfect* escape rn 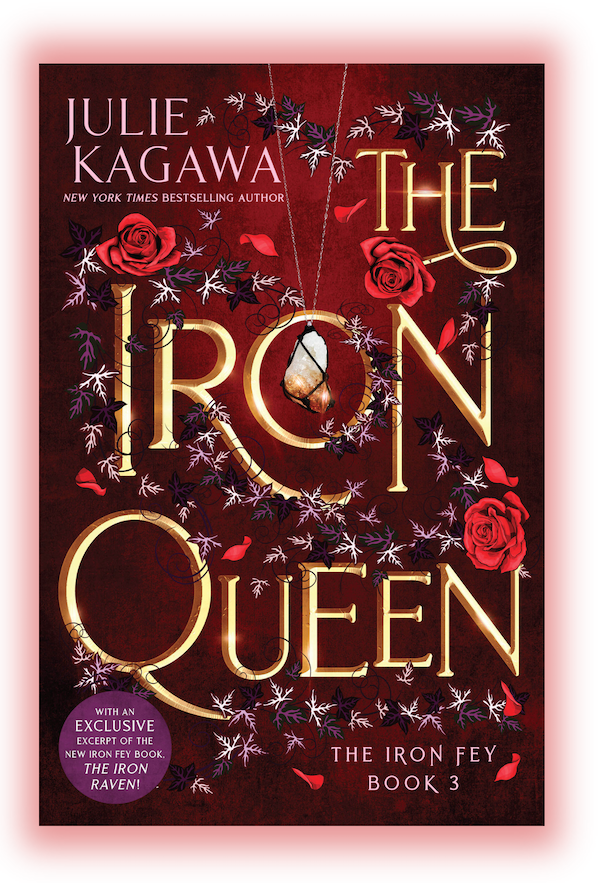 Welcome back to our Bestie Book Club—
a community for book lovers from Girls' Life magazine.

If you're new here, hello and welcome, book lovers! Here's how this works: Each month we read, discuss and obsess over a new book so if you haven't signed up already, be sure to follow us on Instagram where you'll be able to find Bestie Book Club updates, special contests and giveaways, event invitations and more.

THE IRON QUEEN: THE BOOK CLUB AT-A-GLANCE
+ Buy the Book
+ Quick-Read Recap
+ Commentary from our Bestie Book Club
+ Details on how to participate 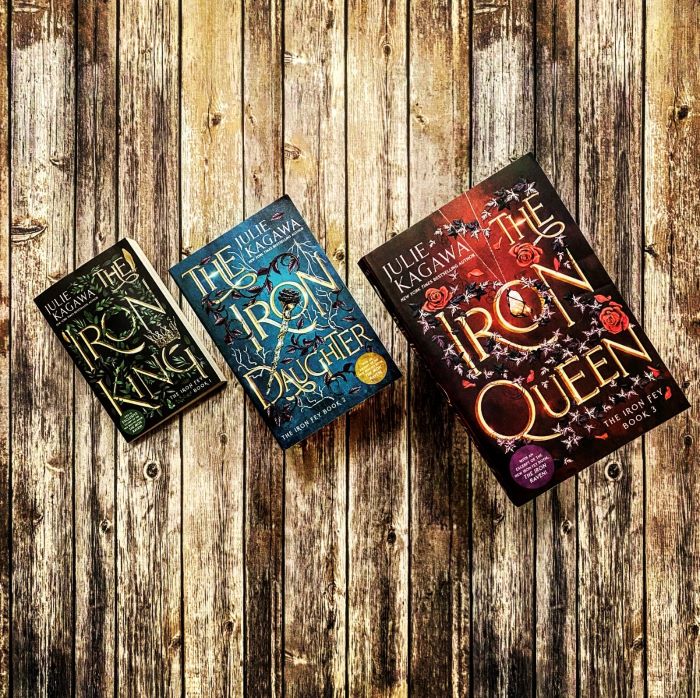 The world is, well, *a lot* lately. Between the ongoing pandemic, a heated election szn and midterms (because somehow school *still* has the audacity to be stressing us out), it's natural to need a breather.

So take this as your self-care permission slip. Light a candle and dip into a lavender-scented bath. Try yoga for the first time (it works, we promise) and top off your Shavasana with a mindful journaling sesh. Then grab your fluffiest blanket and coziest slippers, make a mug of chamomile tea and curl up with The Iron Queen, a magical read that'll make you forget *everything* going on in the IRL world around you.

Meghan's headed on yet *another* adventure with her fairy squad—swoonworthy Ash, BGF (and onetime crush) Puck and the sarcastic talking cat Grimalkin, ofc. There's drama, intrigue and plot twists on every page. It'll *instantly* transport you out of your own head as you're baffled by the Summer Court shakeups and Meghan's indecision in her love triangle.

So give yourself a breather, bb. The Iron Queen is *exactly* what you need right now.

Scope our sneak peek below (warning: *major* spoilers ahead) then reunite with our fave bookish besties Ally, Chloe, Elina, Lauren and Monica (all in our Bestie Book Club) who share why they’re *totally* loving this enticing fall read.

After defeating the false Iron King and returning Queen Mab's stolen scepter, Meghan has *finally* convinced King Oberon and Queen Mab of the existence of the Iron Fey. But that won't stop her and Ash from being banished from the Summer and Winter courts for their love.

Not only are they stuck living on the edge of Nevernever, but Meghan is pretty sure she may have inherited King Machina's powers when she killed him, too...

An attack at the border leaves Meghan and Ash sure that trying to get Meghan home to Louisiana would only endanger her family. But there is another option: She could ask for help from Queen Lea, the queen of exiles.

But Meghan suspects that Queen Lea has taken her foster father, and she wants to find out why—and get him back.

After retrieving something Meghan knows Queen Lea will need, she and Ash encounter an iron fey named Glitch, who tries to kidnap Meghan after telling her that the false Iron King is trying to kill her to absorb King Machina's powers. Out of nowhere, Puck swoops in, saving Meghan and Ash. Finally reunited, the three find Queen Lea and get Meghan's foster father back.

Puck is still angry. Meghan once told him she loved him, but she's taken back her feelings and chosen Ash. Puck gets into a heated fight with Meghan, and storms off, leaving Meghan and Ash alone to train.

But as Meghan trains in swordcraft and summer glamour, she starts to realize that she can't control her glamour well. She now has *both* summer and iron glamour in her, and she'll have to learn how to control both for herself.

There isn't much time. After Puck (grumpily) returns, the three hear from King Oberon and Queen Mab, who offer to lift everyone's banishment—with one exception. Meghan has to agree to enter into Iron Fey territory and kill the false Iron King. As a half-human, she's the only one who can do it.

Joining the gang on their journey to the Iron realm is Grimalkin, the sarcastic feline from the first two books in the series. He tells Meghan that before Ironhorse died, he wanted her to visit the mysterious Clockmaker of Meg Tuiredh.

The Clockmaker, an absentminded man with no details of the false Iron King's whereabouts, instead gives Meghan a key and a pocketwatch, telling her that something huge will happen when the clock runs down.

After leaving Meg Tuiredh, the group decides to return to King Machina's Tower, where they find a rebel Iron Fey camp—and a letter from Prince Rowen, Ash's brother and a traitor to the Winter Court.

Her wants to strike a deal: If Meghan marries the false Iron King, then the Iron Fey army will stop its march over the border of Nevernever. But Meghan refuses and Prince Rowan reveals that the army is already marching toward the rebel camp where she, Puck and Ash are all staying.

War is stirring. Meghan convinces the Iron Fey rebels to join King Oberon and Queen Mab's forces, and as they march toward battle, Meghan senses the false Iron King is coming.

She climbs into the false Iron King's fortress to find the king: an old man named Ferrum. They fight and Meghan is mortally wounded, but not before she transfers her summer glamour into the king...which finally kills him.

Meghan, still mortally wounded, tells Ash to bring her to King Machina's tree, where she releases her glamour to replenish the lands. There's a new Iron Queen, she says—and it's her.

Is Meghan going to survive? Where will her romance with Ash lead? And what about Puck? You'll just have to read Book 4: The Iron Knight...

Did our Bestie Book Club love The Iron Queen? Read on!
We *had* to chat about The Iron Queen with fellow readers who are just as obsessed as we are. Get to know #bookstagrammers Ally, Chloe, Elina, Lauren and Monica—and their *fave* parts of Meghan's amazing journey. Are they swooning over Ash? Did the ending shock them just as much as it shocked us? We’ve got the deets. 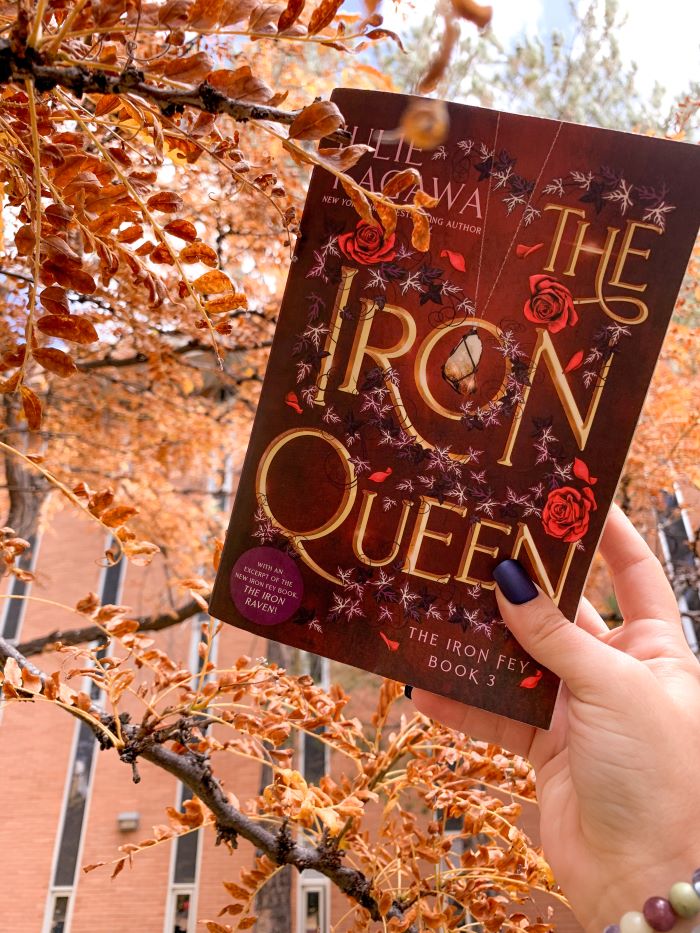 Which character did you most relate to? I most relate to Meghan. Thrown into a new world, she can sometimes doubt herself, but ultimately has to trust in her own decisions. She's witty and can be a little awkward, which I definitely relate to.
Are you Team Ash or Team Puck? Team Ash! I have a soft spot for the prince of the Winter Court.
Book bestie pro tip: Take pictures of the books that you love. You can tell when a lot of thought and love goes into the photos, and you'll enjoy photographing your faves even more. 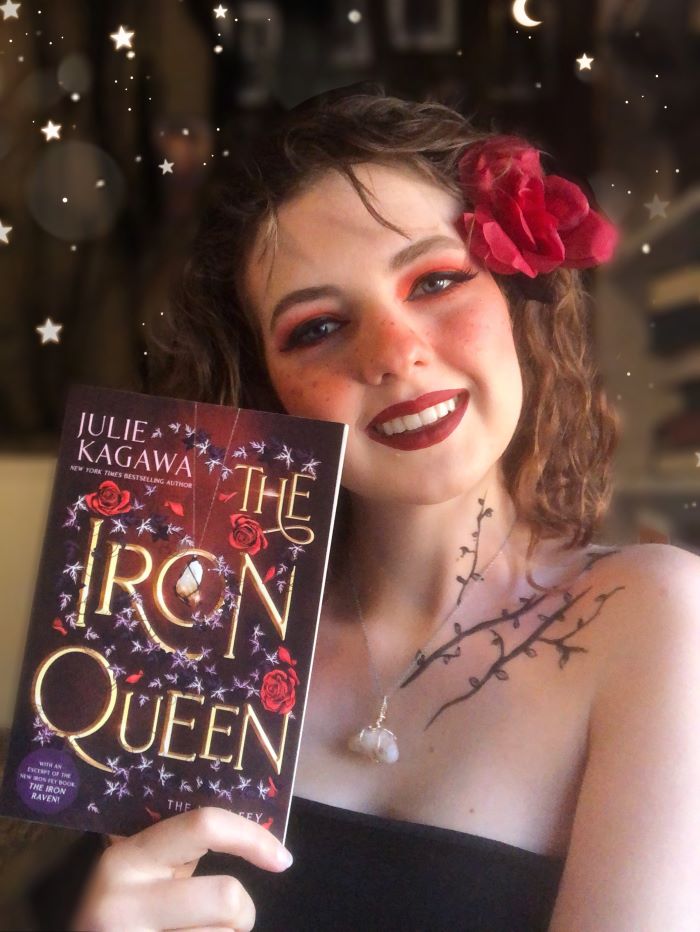 What lessons did you learn fromThe Iron Queen? What is so interesting in books about fae is the lesson on how important words can be. They have to be so careful in which agreements they make. It amazes me how authors can come up with these little loopholes in what can seem such a well-worded sentence.
What was the best scene? One of my favorite scenes was when Ash begins to teach Meghan how to sword fight. I really like to see Ash be all confident and flirty, but still try to teach Meghan how to fight.
Which character did you most relate to? Is it weird to relate to a cat? Seriously! Grim is one of my favorite characters, I can totally see myself in him. Maybe it is just because I like to believe I am wise and mysterious, but I really think it's because cats just want to sleep and eat food...kinda like me. 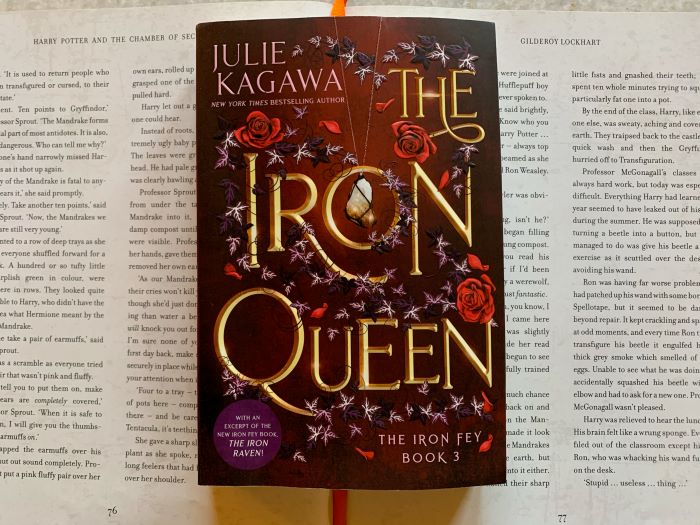 What lessons did you learn from The Iron Queen? Love conquers all! Not just romantic love—all kinds of love. Friendship, parental, all of it plays a role in The Iron Queen.
What was your *fave* part of the book? The witty banter. I'm a sucker for a good snark-fest.
What was the best scene? When Meghan reunites with her dad. So emotional!
Are you Team Ash or Team Puck? Team Puck FOR SURE. Even when Meghan tells him the truth about her having feelings for Ash, he still stays by her side and supports her. I really want them to end up together. 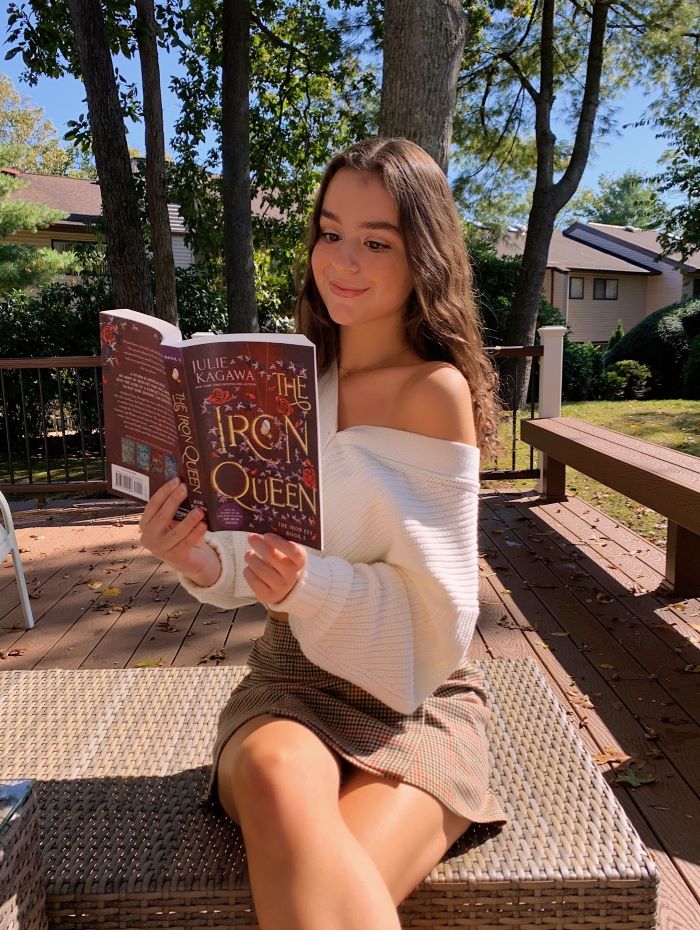 What lessons did you learn from The Iron Queen?  Always believe in yourself no matter how strong you think you are. I saw Meghan grow stronger and more confident in herself. She gained a sense of strength and power as the series went on. Believe in yourself and you can reveal a new sense of inner strength and confidence.
Which character did you most relate to? Definitely Meghan. She's proved herself to be a brave, strong and independent character who's flourished throughout the book series. I relate to her a lot because of her strength and courage to take on any situation that comes her way.
Are you Team Ash or Team Puck? Although Ash has proven himself to be a good guy, I am Team Puck all the way. He's been an amazing friend to Meghan, and when his romantic feelings for her were revealed, it made me love Puck even more.

What was your *fave* part of the book? My favorite parts were whenever Grim popped up unannounced. I loved his nonchalant attitude.
Who would you recommend The Iron Queen to? I'd recommend this book to anyone who loves contemporary fantasy, Fey lore and the totally whimsical vibes of Alice in Wonderland.
#Bookstagram pro tip: Find a style and set up that work for you. Whether that means you keep your props out for a photo any time or you set aside time to take batches of photos, do what feels right for you and make sure to have fun with it.

So you've read the book and you're ready to talk all things The Iron Queen? Wondering *exactly* how the Bestie Book Club works and what it means to be a member? There are so many ways you can get involved—whether it's solo, on social media or with your whole squad. Here's a quick list...
+ SOLO. Take your personal reading game to the next level using the themes of love, friendship and family as a guide for your own journaling and personal reflection. If you love to read, it could be fun to start a special book diary where you keep track of all your favorite novels—and the personal musings they inspired.
+ ON SOCIAL MEDIA. Share your thoughts on The Iron Queen using the hashtag #glbestiebookclub on Twitter and Instagram. (Just remember: You have to have a public account for us to be able to see and respond to your posts!)
+ WITH YOUR SQUAD. Host an IRL (or Zoom) book club party. And be sure to tag us in your snaps so we can share them.