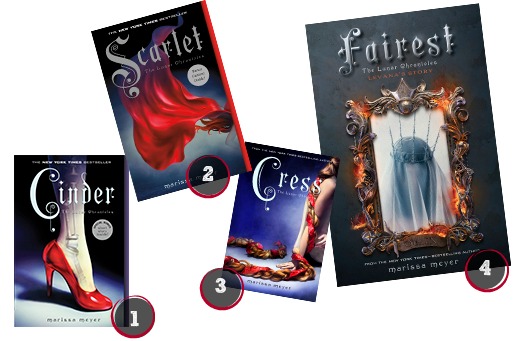 You asked for it: a book club that happens live, right on Girlslife.com. Well, we listened—and we’re so excited to debut our first book club discussion featuring Marissa Meyer’s Lunar Chronicles, an edgy, five-part series that takes place in a dystopian future…but has familiar hints of our favorite fairytales.

Join the club!
So how’s it all work? We’re kicking things off with Cinder, Book 1 of the Lunar Chronicles—and the chat is happening right in the comments at the bottom of this page. So if you’ve already read Cinder, just grab your copy and head straight to the chat, where we’ve got tons of discussion threads going. Answer our Qs or post your own to start a new topic.

Haven’t read it yet? CLICK HERE to order your copy of Cinder, or grab it from your local library. You’ve got plenty of time to catch up—we’ll be talking Cinder for an entire month! Plus, every girl who joins the chat will automatically be entered to win the Lunar Chronicles book of her choice.

Catch up on the Chronicles…
So far, three of the Lunar Chronicles have been released—and the fourth book, Fairest, hits shelves on January 27, 2015. Want a sneak peek…or a quick refresher? Here’s what’s been happening…

In Cinder (Book 1), humans and androids crowd the raucous streets of New Beijing. A deadly plague ravages the population…and no one knows that Earth’s fate hinges on one girl: Cinder, a sixteen year-old cyborg mechanic living under the guardianship of her awful stepmother. But when she meets the charming Prince Kai, Cinder’s life is turned upside down—and she realizes it’s up to her to protect Earth from the evil Lunar Queen.

In Scarlet (Book 2), a Lunar threat spreads across the Earth…and Cinder collides with Scarlet, a teen desperately trying to find her grandmother. The two girls join forces with Wolf, a street fighter who they’re forced to trust—despite his own dark secrets. Together, the group works to unravel both mysteries—and stay one step ahead of the vicious Lunar Queen, who will do anything to make Prince Kai her husband, her king—and her prisoner.

In Cress (Book 3), all hope lies with Cress, a skilled hacker who had been trapped on a satellite by the Lunar Queen since childhood. But when Cress finally gets her freedom, it comes at a higher price than she’d ever expected. Meanwhile, Queen Levana will let nothing stop her marriage to Emperor Kai. Cress, Scarlet and Cinder didn't sign up to save the world…but they may be its only hope.

The frenzy for Fairest…
But long before Levana crossed paths with Cinder, Scarlet and Cress, the now-evil queen lived a very different story—a story that has never been told…until now. Fairest is another unforgettable tale about love, war, deceit and death—and it adds a new, enlightening layer to The Lunar Chronicles. [CLICK HERE to preorder Fairest, out January 15]

Spoiler alert: The book club starts below!
If you’re ready to get chatting, just check out the questions and tell us what you think. We’ll be posting all month, so check back often to see how the discussion develops. Plus, every girl who joins in will automatically be entered to win the Lunar Chronicles book of her choice. We can’t wait to hear your thoughts on all things Cinder…so let’s go! 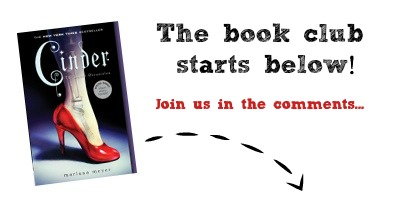