Snag That Dream Job: I wanna...be a video game developer! 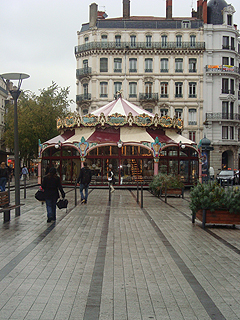 Instant action. Tons of adrenaline. Video games give you that welcoming escape to everyday happenings. But did you ever wonder just how much talent and long hours went into making one of those games? What’s life like on the opposite side of the screen? We’ve got the scoop.


A video game junkie myself, I’ve always questioned what it would be like to work in the seemingly male-dominated field of video game development. A call from the fabulous folks at Disney Interactive Studios last fall gave me an entirely new insight into an industry that’s hot, hot, hot right about now.


So, I packed my bags last November for Lyon, France, and headed to French video game developer Etranges Libellules (ELB), who were in the midst of putting finishing touches on the brand spankin’ new Alice in Wonderland video games, (based on Tim Burton’s latest 3-D flick) for Nintendo Wii and DS (psst! The game is out March 2!).


And while the games focus on a female heroine (Alice, of course) it’s even more intriguing that a female was the mastermind behind most of the process. Developer Edith Protière gave us a peep into the gaming world, offering pointers for those creative chicas who might want to follow in her footsteps some day… 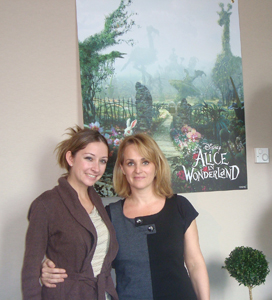 Me (left) with Edith at the ELB headquarters in Lyon.


GL: How did ELB get involved with making games for the exciting new Alice in Wonderland movie?


Edith: We were in contact with this name for a long time. It [finally] came to us that there was an Alice in Wonderland [movie in the works] and we have people in the office who have been Alice fans for ages. We thought it could be a game where we could do something different. Sometimes, you have to really follow the action of the movie [in the game, too]. Here we thought, yeah we have to follow the movie and the story is great, but we can bring really good game playing ideas into it. We kept thinking about the world of illusion and what we could add to it.

GL: What kind of research did you do when you made the games?

Edith: We didn’t even have the script of the movie for confidential reasons. We read lots of books on Alice. [We looked at] old illustrations. Then we got access to the screenplay. We went to L.A. where they were shooting the movie and then, suddenly, things came together and we changed what we planned. [Making the game] was quick [though]. We started last October.


GL: Why do you think now’s a better time than ever to get involved in the gaming biz?


Edith: It’s a great moment for video games because I think we can really express lots of emotion, which you couldn’t really do a long time ago. We can really show to our broader audience that [video games] are not something [directed] to some kind of weird, young adult, but that it is accessible to everyone. 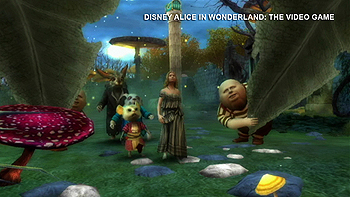 Photo CR: Disney Interactive
What an adventure! Check out this screen from the new Alice in Wonderland video game for Wii.

GL: How did you first get involved in the industry?

Edith: I always loved video games. I started 15 years ago and, it’s true, there were very few people and even less women [in the business]. I was really fascinated by the graphics. I did both computer and business studies [in school], so I thought it would be good to come into this industry. Then I grew, and production changed. When I started, it was on the early Nintendo and the Playstation 1 console. And now we can do better and better things.


GL: What type of education would you recommend girls consider, in the hopes of possibly pursuing a job like yours down the road?


Edith: Computer science or graphic art. We have lots of very talented artists [at ELB] and it’s very important to have a great arts [background]. Producers have various backgrounds in this industry. I think what’s important [though] is to be passionate because it’s long hours and long years. You need to care and play again and again and again. And if you want a good quality game, you need to sometimes start, three, four, five, 10 times [over again].


GL: What are some pros about your job?


Edith: The fact that you start from nothing and have a game at the end of it. It’s such a great accomplishment. You have nothing except a group of people and then you start putting together ideas and then they come to life [before your eyes]. We are lucky working in such a great environment. It’s a fabulous world—[especially] the quality of the Wii [console]. 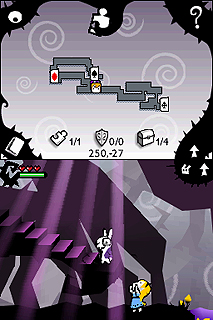 Photo CR: Disney Interactive
A DS game like no other. Get excited to play the new Alice in Wonderland video game for Nintendo DS!

GL: What are some of the cons?

Edith: It’s a lot of pressure [especially] working on [games pertaining to] movies. You have dates you cannot miss. You can’t be one or two weeks late because it has to come out in time with the movie.

GL: What are the positives to being a female in the video gaming industry?

Edith: The fact that, finally, all the men you work with really respect you. At the end of the day, they listen to your point of view. We have lots of artists who are girls. We want to have girls working here. Men do not have the same sensitivity about things.


GL: What about one disadvantage to being a female in this industry?


Edith: Sometimes when the [men] first meet you, they don’t think you deserve the position you have and you have to prove more than ever that you do.


GL: What advice would you give to girls right now about prepping for a possible job in gaming?


Edith: It’s important to play games to discover the value in [them] and to see that there are lots of different [types of] games that are fun to play. I personally don’t like violent games, but there are, you know, racing games that [still give you that] good sensation. It’s good to have different views of the many games out on the market. You should keep an eye on everything and be open-minded to different [titles].


Get more info about Alice in Wonderland and other great games from Disney Interactive!


Would you ever consider a job in the gaming biz? Let us know!

POSTED IN How to get a job