How to deal when your dad is super strict 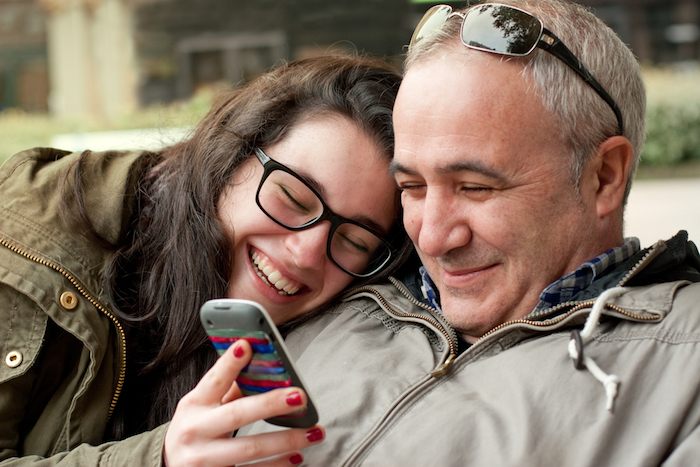 Being Dad's sidekick was sweet when you were small. But now that you're 15? Well, it's a little more complicated, especially when he insists on treating you like you're five, and calling you by your baby name around your BFFs. Ugh. Here are four sure-fire ways to stay tight with Pops during your teen years...and beyond.

Be Honest
Your dad loves to make Saturday a.m. brunch, which is great in theory, but in reality, it means you're stuck with a stack of Minnie Mouse pancakes on the regular (yes, even when your besties have spent the night). So, how to get him to stop doing the stuff you feel you're over? Speak up, sister. Let him know you appreciate the gesture ("Dad, it means everything that you wanna cook for me and my friends."), but gently tell him that you've outgrown some of the traditions. Like the nickname he gave you when you were two. Discussing your feelings honestly will give you major maturity points, but make sure to do it at a time that won't put either of you on the spot.

Truth is, Dad probably just wants to spend time with you and keep playing a major role in your life, even as you get older. Offer up some suggestions for how you two can hang out. If regular brunch is your thing, maybe you can whip up a new recipe together or swap out storytime for a walk around the block, where you two can talk.

And keep in mind: You don't have to fade all the old stuff all at once. A stack of Minnie Mouse flapjacks sounds kinda perfect to us, FWIW.

Act Your Age
Trying to "pretty, pretty please" your way to a later curfew or whining while asking to borrow the credit card for those new booties isn't going to land you on the mature list. Pulling the "Daddy's little girl" card when you see fit isn't fair, and ruins your case that you're sooo grown up. Actions mean lots in parentland, so start washing the dishes without being asked, do your homework on time and follow all the house rules. And then? Mom and Dad will see that you're more mature.

Give it time
Most dads aren't exactly psyched that their daughters want to date or that their girls have swapped those old dress-up princess outfits for miniskirts. So, go easy on the guy, so he can get used to the more grown-up you. Let's say your parents have given you the "yes" to wear a little bit of makeup. You could avoid dark liner and mega lips, at least until M&D are used to you sporting a little gloss and mascara.

And when it comes to guys? Parents all have different rules, but let's say yours have given you the OK to go out with a boy or double up with your BFF and her guy. Yay! Be ready for a "but..." to follow their approval. Next thing you know, Dad is saying he wants to meet this potential BF of yours. Or, he says you two can go out, but your guy can't drive you around in his old car, with that freshly-minted license.

Instead of flipping, remember these are classic Dad moves. He cares, and wants to make sure you're safe. This is where the art of compromise comes into play. If you think he's being truly unreasonable, see if you can chat with your mom and get her thoughts. If it seems like he's not going to bend, well, be happy that you got any leeway at all (hey, group dates are fun) and see if he'll ease up on the rules after your guy has proven himself to be upstanding in the eyes of your old man.

So...how do you and your dad deal with you growing up?

POSTED IN Family, problems with my parents, LIFE