What to do when there's tension between you and your bestie 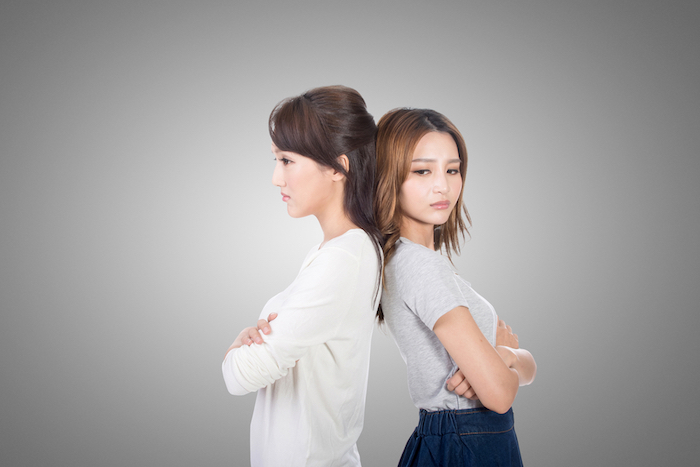 BFF break ups are a part of life, and they most certainly aren’t a pleasant part. Sometimes we part ways with long-time friends because of arguments and tensions, but other times we just grow apart because of distance or differences. Either way, these things can definitely take a toll on everyone involved. So how do we deal with them?

The issue
For starters, it’s important to spend time identifying the root of the issue you and your friend are having. You can't solve a puzzle if you don't have the pieces, right? If you and a pal are parting ways because of a fight, think: Is this fight important enough to ruin our bond? Is it a topic you feel strongly enough about that I'm willing to cut ties with someone close to me? (Pssst: If the fight is about a boy, it’s probably not something to lose your BFF over.)

The solution
Confront the issue now instead of waiting, and be honest. Lying about your feelings (just to make your friend happy or because you think it's easier) definitely won’t make your relationship any healthier. If she’s a true friend, she’ll appreciate you telling her how you really feel and maybe you two can work things out.

But if it’s a topic you just can’t seem to move past, that’s OK. Some people aren't meant to be in our lives for ever. If that seems like you and your friend, don't walk away from the friendship without having said everything you need to say. Closure is satisfying and necessary when you’re leaving someone you’ve known and cared about for a while. It can be scary, but it’s ultimately worth it—for you *and* your pal. Let them know you’ll never forget all of the happy memories you’ve shared together, and that the relationship has ultimately meant a lot to you.

If your friend isn't willing to talk at all, that makes things much messier. Ultimately, though, there's nothing you can do about that. Instead of keeping your feelings bottled up inside, write everything you would've said to your friend down in a letter. Seal the letter and then toss it into your desk drawer or somewhere else safe. You'll feel better having let it all out, rather than dwelling on the negative energy.

Do you have any tips on dealing with friend fallouts? Share in the comments below!