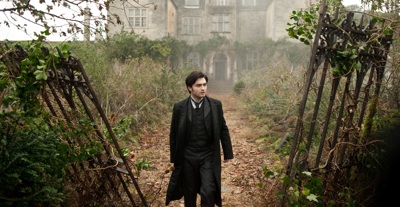 So long, Harry Potter. Daniel Radcliffe is dropping those perfectly round specs…and taking on a much creepier role. We can all catch him Friday, Feb. 3, as Arthur Kipps, a lawyer who encounters a vengeful ghost terrorizing an isolated English village, in The Woman in Black.

Eager to hear all about the chill-worthy flick, we caught up with our favorite Brit babe and had him spill all the spooky deets. Oh, yea, and we’re gonna go ahead and believe the cutie when he says this new movie will make our heart race.

GL: So why should we all check out The Woman in Black when it hits theaters?

Daniel: If you want something to excite you, then this is the film for you. It is a supernatural thriller that will get your heart racing, and should make you scared of the dark.

Was filming much different than the Harry Potter series?

All film sets are essentially pretty similar in that you’ve got a rag-tag bunch of people aiming towards one goal, which is to make a great film. A lot of the crew from Potter also worked on The Woman in Black and so for what is a very scary, grief-stricken film, I had a very happy time making it.

All right, this movie definitely sounds scary. And with the success of Harry Potter, you must know all about scary fan run-ins. What stands out the most?

It was right before the release of the first film when I was 12. I was walking around Paris and just happened to look to my left at the same moment a girl a foot beside me was looking to her right. She recognized me and screamed instantly. Very high-pitched and very loud. That kind of freaked me out.

The Woman in Black also has a bit of mystery to it. So, tell us, what’s one mystery you’d like to crack about girls?

What point in your life does every girl learn to do the towel around the head thing out of the shower? No [guy] can do it, and girls seem to be genetically predisposed to do it in one move. If you get answers, please send them to me.

Sneak a peek at Dan as Arthur Kipps below…

Want more from Dan? Be sure to pick up our copy of the February/March 2012 issue, on stands now!

Are you going to see The Woman in Black? Blog about it, babes.