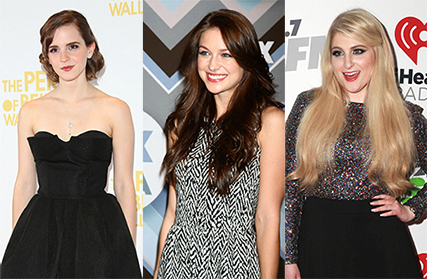 Another seven days has somehow passed and our fave celebs have been out doing some things that are making our jaw drop. From band rivalries to a dream duet, we’re here to tell you everything you need to know on what happened in La-La-Land this week.

We all know and love Melissa Benoist from her character Marley on Glee and, although we’re sad to say goodbye to the show, we’re happy to know that Mel will still be on our screen. The star has nabbed the leading role in the upcoming show Supergirl. The show is all about Kara, played by Melissa, Superman’s cousin who escapes from planet Krypton to Earth and must learn to control her powers. We can’t wait to see Melissa be the supergirl she really is.

There has been a ton of speculation on whether The Vamps’ Brad Simpson and Fifth Harmony Lauren Jauregui are still an item, and this week we got our answer. During an interview, when Brad was asked about his relationship to Lauren, Brad’s band member James McVey raised his eyebrow and said, “We’ve all had a go,” while laughing. This naturally caused tons of backlash and the 5H members took to Twitter supporting their girl. James realized his mistake and Tweeted out that, “The band were all attractive, and we tried to flirt at the start. I failed, clearly. I meant we all 'had a go' at flirting.” James has definitely learned his lesson.

It’s no secret that Emma Watson has taken the world by storm with her famous United Nations speech and now she’s done it again. Emma spoke at the World Economic Forum in Davos, Switzerland to speak about the huge impact that the He For She campaign had on the world and what the next step is. We love how Emma publicly encourages everyone to do what they think is best to support the cause and how it will look different depending on the person. Emma is the new face of equality and we know that 2015 is just the beginning.

Meghan Trainor is taking over the charts with her hit album Title and we know that she is just getting started. Meghan just revealed that she and Harry Styles created an amazing acoustic love song together that has a hint of ukulele. Apparently this duo has already done a rough recording of the song and we can’t wait to hear it! The best part? Meghan could not stop saying good things about Harry – which is no surprise to us! Here’s to hoping that this song gets released ASAP.