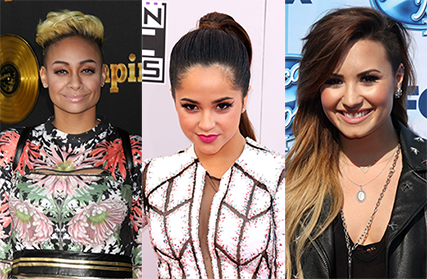 Tons of celebs did amazing things this week that made our jaw drop. Who did a hilarious yet important collab and what cover is going to be on repeat for the next week? Read on to find out!

This super cute sister duo is wowing us once again with their incredible talent. This week they released a new cover of them singing the hit "Boom Clap" by Charli XCX. We love how they brought a new sound to the song and slowed down the beat. Their folky voices mixed with an electric guitar and echoing words created something truly incredible.

Yes, the rumors are true: Raven Symoné is making her Disney Channel comeback. Zendaya shared a picture of the K.C. Undercover script on Instagram that had Raven listed as an upcoming guest star. We don’t know much about the character Raven will be playing, but we just know it’s going to be a memorable one.

Fifth Harmony and Becky G. teamed up with comedians Grace Helbig, King Bach, Alphacat and Harley Morenstein to create a video all about how someone gets fewer matches on social media sites when they have a picture of themselves smoking. This hilarious vid’s goal is to direct attention towards the unattractiveness of smoking and help decrease the amount of teen smokers. We love that our fave celebs are working towards an amazing cause – and the song is pretty catchy, too.

One of the reasons why GL loves Demi Lovato so much is because she's so open and honest about her past. She constantly encourages the younger generation to be themselves and isn’t afraid to speak out about the truth behind mental illness. When Demi tweeted out that next month would be her 3 year anniversary of becoming sober, we couldn’t help but smile. We are so proud of you, Demi, and can’t wait to see what you do in the years to come.