Interview with the JoBros: Ready to rock 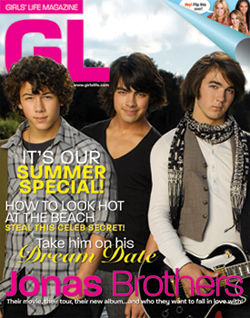 The Jonas Brothers have lots of stories to tell. And it’s no wonder, given their rise to fame.

“There have been many moments where we’ve had to just sit back and say, ‘Wow,’” says Nick. “One of those moments was the Texas State Fair right before we went on tour with Miley [Ray Cyrus]—50,000 people showed up to see us play. And in our New Jersey hometown, we played a sold-out concert in the same arena where we always went to see our favorite bands. It was an incredible feeling.”

In just one year, the trio rose from being a (mostly) overlooked opening act with a modest debut CD to chart-topping superstars.

And add to that their about-to-explode acting career that launches with this summer’s most-anticipated TV movie (Disney Channel’s Camp Rock, premiering June 20) and their TV series (J.O.N.A.S. aka “Junior Operatives Networking as Spies,” starting production in September for a winter debut on the Disney Channel). Somehow during all that, they managed to write and record their third CD for release August 12. And did we mention their “Burning Up” summer tour?

“So far things have been lining up perfectly, and we never, ever want to take for granted all these great blessings that are happening,” says Joe, who loved portraying an ungrateful band diva, Shane Gray, in Camp Rock. “My character is kind of a jerk who is sent back to summer camp to learn his lesson.” 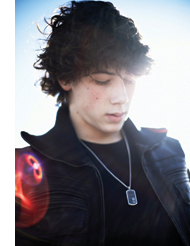 Chatting about Camp Rock gets the guys feeling nostalgic about their own camp memories, including a common highlight: summer crushes found among the sleeping bags and insect repellent.

“Summer romances are good,” Joe smiles. “We all went to camp a lot, and one of the best things about it was that we would always meet girls there.”

So when it comes to meeting girls, what makes their hearts skip a beat?

“For me, it’s when a girl has confidence,” Nick says immediately. “And it always touches me when a girl is encouraging—it really makes you feel she honestly cares about you.”

Kevin likes “a girl who’s laid-back and makes me laugh.” And Joe? “I love a natural beauty with a cool sense of style who stands out a little because she’s
happy being who she is.”

Not surprisingly, girls have done some pretty crazy things to try to get their attention.
“Once, a girl jumped in front of our car…while we were driving it,” Nick shakes his head.

“That was interesting,” Joe deadpans, then reminds Nick and Kevin about the girl who gave them a dead shark. “No idea why.” And then there was the gooey, dripping mail delivery. A super fan wanted to share her birthday with Joe, so she mailed him a slice of cake. Ice cream cake. “That was just too weird!”

So, then, how do girls really get their attention? “Hey,” Nick quotes, imitating a super-quiet girl voice. “What’s up?”  He laughs then finds his real voice again. “Girls don’t need to say much to get my full attention.”

That’s also true for oldest bro Kevin (who has crushes on both Hayden Panettiere and Brenda Song) and family-clown Joe (whose idea of the perfect girl is Natalie Portman).
“One time this girl said to me, ‘I got my library card right here ’cause I’m checking you out!’” says Joe in his sassiest tone. “That was pretty good because I couldn’t help but laugh, and it started a conversation.”

And the Jonas Brothers can dish it out, too. “Nick had the best line that I can remember,” says Joe.

Don’t get them wrong, though: The Jonas Brothers play the game of love as fairly as possible and have their own gentleman’s rules of conduct. Commandment No. 1: Thou shalt not make moves on thy brother’s squeeze.

Oops. Joe has already gotten in trouble for that one.

“When he flirts with a girl that one of his brothers is into, it’s a problem,” Nick points the finger.

Joe has a reputation for being the trio’s biggest flirt, so is he guilty as charged? “Yes,” he confesses. “And I’ve been pummeled for it. It happened once when I started flirting with a girl that Nick liked and I had no idea. He was like, ‘Dude. Lay off.’”

LIFE ON THE ROAD

But relaxing by the pool and chatting up girls on the beach will be taking a backseat this summer. “No beach paradise for us,” says Kevin. “We’ll be on tour with Avril Lavigne all over Europe ’til June, then we’ll be waking up on a tour bus every day.” The U.S. leg of their tour (running from early July to the end of August) sold out instantly.

So is life on the road tough? Says Nick, “It’s not exactly summer vacation, but going on tour is really cool. All summer long we’ll get to play cool venues. It’s going to be incredible.”

A typical tour day? Turns out, no day of being a Jonas is all that typical. “Yeah,” says Joe, “it changes every day, but usually we get to sleep in, then we grab something to eat, go to the venue for setup and sound check. After that, we get to see the city a little bit and have some dinner. Then we play a concert that night.”

And after the shows? “We all try to have as much fun as we can,” says Kevin. “I had my birthday party on our ‘Look Me In The Eyes’ tour bus. I handed out invitations on the tour and we had a huge party on the bus with music and lights going. It was awesome.”

“We had some great birthday celebrations for our band and our crew,” adds Nick. “When my guitar tech had a birthday coming up, I asked, ‘What do you want?’ And he told me he’d always dreamed of having a slip and slide with Jell-O. When his birthday came around, we set up a Slip ’N Slide filled with Jell-O and had it waiting for him backstage at the venue. It was probably the best birthday he’s ever had!

“Only problem was that Nick, Kevin and I were in our show clothes so we couldn’t slide in it, too,” Joe laments. “Next year, dude!”

Stumping the chatty Jonas Brothers is not an easy task, but when they’re asked about their dreams for the future, they pause for the first time. “We used to have a dream list of things we wish would happen—and they’ve all come true,” says Joe. “We wanted to do a movie, and Camp Rock happened. We wanted to do a big tour, and we did two. Now we’re doing an even bigger arena tour. We’re afraid to cross our fingers for anything more.”

But the Jonas Brothers’ No. 1 all-time favorite dream-come-true? It happened last Easter when they had the opportunity to perform at 1600 Pennsylvania Avenue, Washington D.C. “Playing at the White House will definitely always be one of our favorite memories,” says Joe. “You can’t really beat it. It was the coolest! We got to meet the President and the First Lady. We can’t wait to go back.”

So what did the leader of the free world think? President Bush revealed himself to be quite the Jonas Brothers fan, quoting one of their songs during the Easter egg-rolling contest. “That’s just the way we roll,” the President said privately to the guys with a wink. (He also leaned over and whispered, “I like them shoes, Joe,” complimenting his pink Superga sneaks. Who knew the Prez had such hot fashion sense?).

“But really, our dream is just about playing music, and it’s come true,” Joe adds. “This summer tour is especially a lot of fun.”

“It’s been so amazing,” says Kevin, struggling to find the appropriate words to describe it all. “No matter what we do, everyone has made sure our music is a major part of it, because that is everything that we are. We’re so pumped. So happy that we’ve been blessed with everything possible.”

“I don’t think we regret one thing that’s happened in our career yet, and we’re really happy with the kind of people that we are,” Joe says. “We are so thankful for every moment that we’ve had. We’re living the dream.”

POSTED IN Blush Much, Jonas Brothers