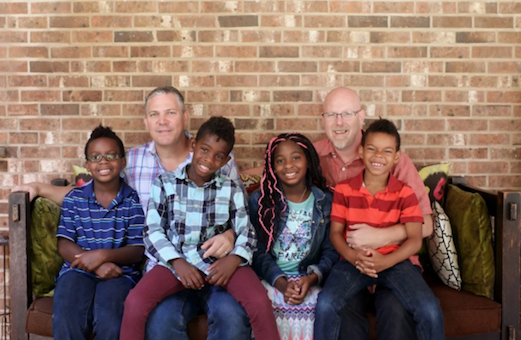 When 11-year-old Amaya Scheer was featured in the latest issue of American Girl Magazine, she never could've expected the backlash she'd face. Amaya was highlighted by the magazine for her efforts to give back to kids living in foster homes, but when the family-values group One Million Moms saw the article, all they seemed to be able to focus on was the fact that Amaya had two gay dads.

According to NBC Washington, Amaya and her three brothers, Greyson, Makai and Tristan, had all grown up in foster care before they were adopted by their fathers, Rob and Reece Scheer, from Darnestown, Maryland. The Washington Post reports that Rob, who had also grown up in foster care, knew that many kids in system rely on trash bags to carry all of their belongings from home to home, and decided to give back by founding a charity called Comfort Cases which provides backpacks with items including pajamas, toothbrushes, blankets and stuffed animals to kids still in foster care.

Though Amaya was excited to share the work she'd been doing with her family, she was disappointed to learn that One Million Moms had totally missed the point, instead encouraging readers and their families to cancel their subscriptions to the magazine because it featured a family that didn't align with their values. In a statement on their website, the group said, "American Girl is attempting to desnseitize our youth by featuring a family with two dads. If your child has not seen this yet, then be careful she is not exposed and can avoid a premature conversation she is far too young to understand."

"I don't live in a plastic bubble," Rob Scheer told the Washington Post. "I am a gay man and I have four African American kids. I understnad people out there are ugly. But I didn't expect a group of moms to say we are sinners." Julie Parks, a spokeswoman for American Girl, agreed that she was disappointed in the response, sharing that the magazine only ever meant to "shine a spotlight on a girl who is making a difference."

Still, the Scheers can't help but hope that the attention will bring more donations to their organization, and help them help more kids across the state—and even the country.

What do you think of the controversy surrounding Amaya and her family?

POSTED IN Family, LIFE, sexuality, In the News