These inspiring girl scouts are encouraging girls to raise their hands 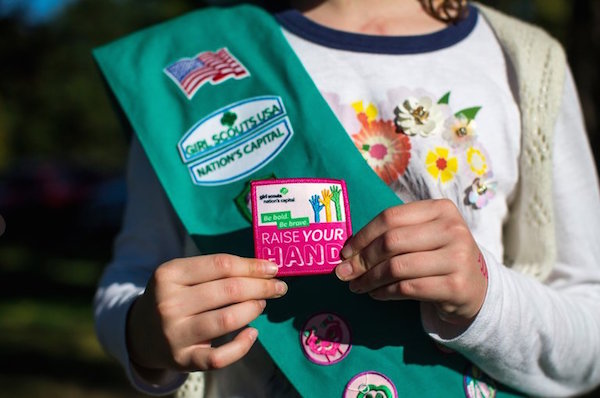 When 10-year-old Alice Paul Tapper was on a field trip with her fourth grade class, she noticed something very unsettling: The boys in her class stood in the front and raised their hands, participating while the girls stood in the back quietly.

While the boys were unafraid to participate, even if they were wrong, the girls were embarrassed that their answer may not be correct. Plus, the guys already had the teacher's attention, and no girl wanted to jump in.

This upset Alice—and it should upset you, too. Why? Girls shouldn't feel the need to step back and let guys do all the talking. So, Alice decided to do something about it. She brought the issue to her Girl Scout troop, and the other 12 girls agreed that they'd seen this same problem. Maybe you've even seen it at your own school. The girls also talked about potential solutions, and decided to create a Girl Scout patch that would encourage girls to raise their hands—and their voices—with confidence.

So, how do you earn the patch? Girls have to pledge to raise their hand in class, and additionally, they must recruit three friends to do the same. This way, more and more girls will begin to recognize this issue and combat it by raising their hands! It's not important that you have the right answer all the time. Just raising your hand and participating confidently—even when you're wrong—shows that you can be a great leader.

What do you think, GL girls? Will you be raising your hand more in class? Let us know!

POSTED IN TRENDING, In the News, leadership 101, girl power, In The News