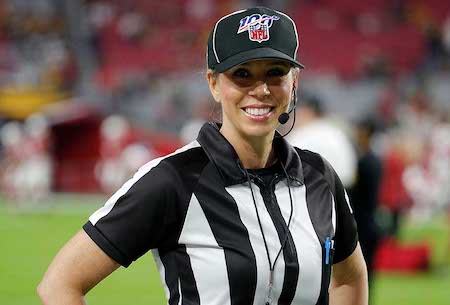 Sarah Thomas is breaking through barriers and right onto the football field.

For the first time in NFL history, Super Bowl LV had its very first woman to *ever* officiate as a referree for the big game.

Sarah made history back in 2015 as the first permanent female official, and became the first female to officiate an NFL playoff game in 2019. Nearly two years later, Sarah has made history *again*.

She grew up as an avid athlete, lettering in high school as a softball player then going to college with a basketball scholarship. Surrounded by a football-loving family, Sarah began officiating grade-school football games and was recognized for her talent in 2006. She became the first woman to *ever* officiate a college football game in 2007—and now she's at the Super Bowl.

Tell us about your amaze sports experiences and accomplishments on Twitter @girlslifemag!