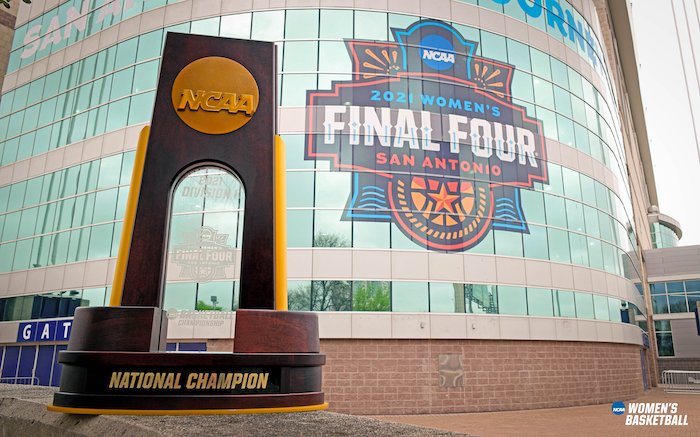 It all came to a head on TikTok Thursday, ahead of 2021 March Madness. NCAA athlete Sedona Prince posted a video comparing the training spaces mens' and womens' teams are being provided for their time at the tournament in the following weeks.

it’s 2021 and we are still fighting for bits and pieces of equality. ##ncaa ##inequality ##fightforchange

Sedona, an Oregon Ducks sophomore, showed off the weight rooms for each team in a video that has now gone viral with over 2.9 million views. The mens' training facility in Indianapolis is a fully-stocked weight training facility. The women's room in San Antonio? One set of weights and a pile of yoga mats.

"If you aren't upset about this problem, then you're a part of it," Sedona says in the video.

@ncaawbb @ncaa this needs to be addressed. These women want and deserve to be given the same opportunities.

In a year defined by a fight for equality this is a chance to have a conversation and get better. pic.twitter.com/jFQVv1PlUt

In a statement released by the NCAA after Kershner's tweet, officials said the disparity wasn't a matter of funding, but a matter of space.

"In part, this is due to the limited space and the original plan was to expand the workout area once additional space was available later in the tournament," the NCAA Women's Basketball said in a tweet.

But Sedona's TikTok speaks for itself.

"Here's our practice court, here's that 'weight room' and here's all this extra space," she says while panning the video to film a large, empty room.

Soon after, others began sharing comparisons on social media, from food options to sponsorships.

From what I have been shown it appears the swag bags that the Men receive from the @NCAA are much more substantial than the Women as well. @ncaawbb @marchmadness. C'mon NCAA do better. Be better! pic.twitter.com/tDRjI9e5UJ

Friday evening, the NCAA responded to the backlash in another Twitter statement.

"We have intentionally organized basketball under one umbrella [at the NCAA] to ensure consistency and collaboration. When we fall short on these expectations, it’s on me,” NCAA Senior Vice President of Basketball Dan Gavitt said.

Just like Sedona says in her TikTok's caption: It's 2021. Women's basketball shouldn't have to be fighting for bits and pieces of equality.