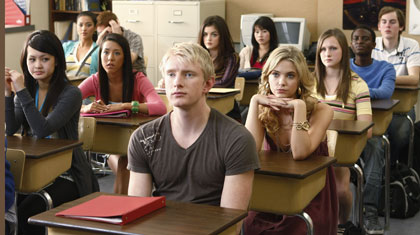 
If you aren't already ecstatic that Sara Shepard’s bestselling series is being turned into a hit TV show, you soon will be. The show blends both the struggle towards popularity and becoming the new "it" girl with a mysterious undertone. It's the perfect mix between our fave primetime regulars Gossip Girl and Vampire Diaries.
We caught the pilot episode before it aired and, must admit, the first episode alone does a great job of introducing all of the main characters while setting up an intriguing plot that will have viewers clenching their chairs.
Here’s a peek at what to expect:
The first episode introduces the audience to many new characters by showing a brief clip of the past. Five teens girls were in a barn having fun, proclaiming their true friendship towards each other, thinking their secrets would be the bond that could never break them.


Little did they know that the very thing that was meant to keep them forever linked together would soon become the driving force that would try to tear them apart. All the girls fall asleep in the barn, waking up to discover their friend—and former "it" girl—Alison has disappeared. 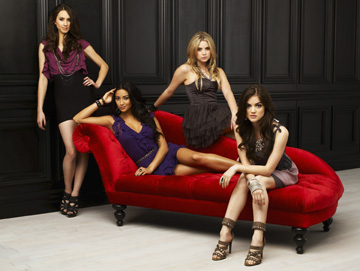 Fast forward one year and the four remaining buds are still effected by their friend’s disappearance. And as the first day of school arrives, they soon realize this year might be as earth shattering as the last. Alison, the vanished popular teen, is supposed to be dead...but what happens when your dead friend begins to send you threatening text messages about only secrets very personal to you?


Pretty Little Liars has twists and turns that allow the audience to embark on a journey where secrets play as a catalyst in starting trouble. This show battles both the stress of teen adolescence with a mysterious vibe unlike any other show currently on air.


While Pretty Little Liars could possibly become the latest new craze, it's unclear as to what age group the show is truly appropriate for. The catty teens are portrayed to be fashion forward and trendy, but have a mature aura about them. And the situations they face tend to be a tad grown up for girls who are only supposed to be 15.


Needless to say, it's pretty clear that this show will stir things up a bit. So call up your best friends, bring popcorn and an open mind, and venture into the world of Pretty Little Liars June 8…then let us know your thoughts?


Are you a Pretty Little Liars fan? Blog about it, babes.