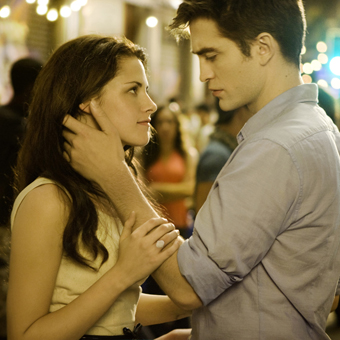 As we all know, Nov. 18, 2011 marks the beginning of the end for the Twi-verse when The Twilight Saga: Breaking Dawn – Part 1 finally hits screens. But is the moment many of us have all been waiting for, the wedding of the century, worth the wait? GL was lucky enough to catch the flick before it hit screens and we’re giving you (SPOILER ALERT!) our review.

In true Twilight fashion, the film starts with rain…and a shirtless Taylor Lautner seconds after the opening credits role. Unfortunately, that’s about the only ab-age we see of the werewolf for the rest of the flick. The first part of the movie focuses on the highly-anticipated Edward and Bella wedding, which we admit, quite possibly might rival that of Will and Kate’s.

The decorations? Extravagant and whimsical. The toasts and dancing? Hilarious. The nerves? So lifelike you feel just as anxious as Bella before walking down that aisle, which, keeping to wedding tradition, is the first time we see her actual dress in its entirety. Simple in the front, bold ‘n’ lacey in the back, the gown’s tailored to the character perfectly…including her white kicks.

Fast forward to the long-awaited honeymoon sequence and things are still charming. Keeping to PG-13 regulations, the much buzzed about bedroom scenes leave much to the imagination, filled only with piecey close-ups and minimal skin. But it’s enough to still make ya squirm if watching next to your rents.

And from there, the cheery colorfulness turns grey and the rest of the flick is loaded with intense chaos. Well, the movie does cover a wedding, honeymoon, pregnancy and birth all in 117 minutes. Bella soon learns she is pregnant with Edward’s part-vampire child and it’s starting to kill her from the inside out. Yes, there’s a ton of blood! But not as gore-ish as portrayed in the book.

While intense, this flick has the least amount of action (only one fight sequence) of any of the Saga movies thus far. And the special effects tend to be more humorous than believable. But you still walk away from Breaking Dawn – Part 1 with everything you want to see: The powerful love Edward and Bella have for one another, snarky one-liners from Jacob, answers to how director Bill Condon was able to remain loyal to the book but in a tactful way, and an jolting final shot more intense than any of the other endings that will make you wish November 16, 2012 was that much closer.

Be sure to check out The Twilight Saga: Breaking Dawn – Part 1 when it lands in theaters tomorrow. Then come back and let us know your thoughts.
Heart this post? You’ll love these, too!