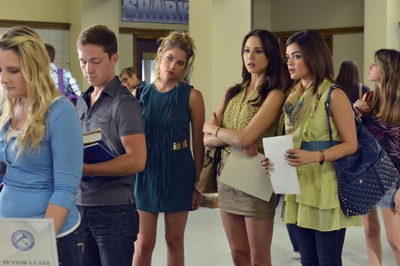 Last night was the season 3 premiere of PLL! Did you watch? We can’t wait to see what’s in store for the pretty Rosewood ladies this season.

Last season ended with revealing “A” (we still can’t believe it’s Mona!), and left us with unanswered questions: If Mona isn’t working alone, then who is helping her? Is the body found Maya’s?

The usual occurred in Rosewood during last night’s season premiere. The girls were still hiding secrets from each other, being questioned by the police and receiving threatening texts from “A.”  There were some shockers, though. And we’re listing them right here. Could it be that season 3 might be the best season of PLL so far?

Who is trying to frame Emily and the girls for stealing Alison’s body?! Phone calls from Unknown, breaking into Spencer’s house to use her phone and no evidence to who stole the body—sounds like a devilish “A”-like plan to us!

2. Who gave Aria the panic attack?

We don’t blame Aria for freaking out.  If we were trapped in a bathroom stall with someone dressed in all black quietly roaming the bathroom, we’d have a panic attack too! If Mona’s locked up, who was it? Perhaps Mona’s partner in crime?

3. What happened in that car?

Emily’s memory is foggy, and “A” is taking advantage of it. Seeing a blue car on her run jogs Emily’s memory of the night of the disappearance of Alison’s body, right as she receives the text, “I bet you remember me” from Unknown.  What happened in that car—we’re dying to know!

4. Garrett knows who stole the body?!

While Garrett is escorted away by prison guards after pleading to Spencer he’s innocent, he screams to Spencer that he knows who stole the body.  Do you think he really knows? Is he innocent? If he didn’t kill Alison, then who did?

5. The creepy motel & the pictures

After Spencer brings the girls to the motel room to find all of “A’s” things are missing, her car alarm goes off outside. The girls run outside to find Spencer’s car doors are wide open. And as they approach the car, they see the seats and trunk are filled with photo evidence of the girls at the scene of Alison’s empty grave. It wouldn’t be a PLL episode without all four girls’ cell phones ringing at the same time with a text from “A”: "Mona played with dolls, I play with body parts. Game on." ~A

What are you most excited for this season? What are your PLL predictions? Blog about it, babes.

We're answering all your
friendship questions 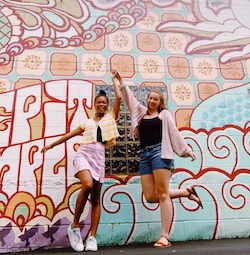 Become the *ultimate* BFF with the best advice, brought to you by LEGO Friends, right HERE. 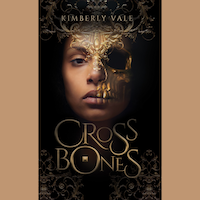