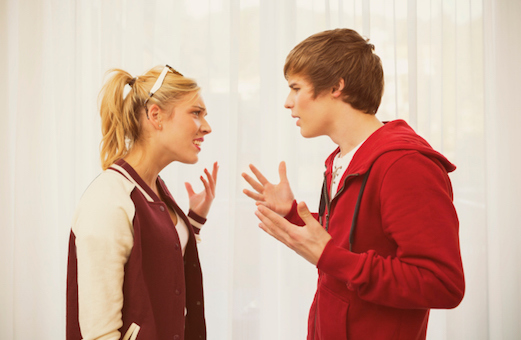 You finally landed a BF–yay! Relationships are obviously ah-mazing, but they also take a lot of work. It's not hard to get caught up in the excitement and drama of a new dude, but make sure you're staying grounded or ya might be single before you know it. Keep your cool and avoid these common BF blunders and you'll be more than ready for romance.

Every girl loves romantic movies, but it’s important to stay practical. This isn’t The Notebook—don’t expect your BF to come up with grand romantic gestures and sweep you off your feet. It’s okay to be hopeful and to want your BF to do nice things for you on your birthday and V-Day, but let’s be honest, don’t expect him to read your mind. He’s not a psychic, he’s just a normal dude.

It’s nice to want to spend quality time with your BF, but there's a line that should be drawn. Begging your BF to hang out every day after practice probably isn’t practical for him (after all, he needs to do homework, eat dinner, talk to his parents, shower—sleep maybe?). Let him spend time with his guy friends too. Every week, put aside one night where your boyfriend can hang out with his friends and you can hang out with your girlfriends—no interruptions. That way, the two of you don’t have to sacrifice previous friendships you’ve had because of your awesome relationship.

Saying “I love you” too soon

Maybe saying “I love you” isn’t in the cards for you two (totally okay), but expressing your head-over-heels feelings for your new boyfriend too soon might scare him off. Really liking him is great, but make sure you take it slow. A lot of guys in middle and high school aren’t ready for a serious relationship—maybe you aren’t ready for a serious relationship either—and there’s nothing wrong with that. Make sure you’re really certain how you feel before you tell him how much you care about him.

Asking him to pay for everything

You work hard on the weekends so you can score some extra cash—how would you feel if you had to spend your hard-earned money on a friend? That’s probably how he feels spending his allowance on movies every weekend. Sometimes guys like to pay because they know it makes you happy, but that’s just it—sometimes they like to pay. Don’t ask him to pay every time you go out—he can’t afford it. Use your Christmas money for some of your dates, or keep it low key and rent a movie at home. Remember, he probably loves spending time with you, but sometimes, he simply can't afford it.

Blabbing to your friends about your love life

Your besties are everything to you. They know your embarrassing moments, your secret fears, and every problem you’ve ever had. It’s great that you trust these girls so much that you can tell them everything, but you should probably refrain from telling them everything. A relationship between a boyfriend and a girlfriend is a really special bond, and your BF isn’t going to appreciate you blabbing to your friends about how he didn’t call when he said he would, or how he had to cancel your date. He also might be embarrassed if you told your girlies that he wrote you that adorable poem, so keep those things between you and him. Keeping some things from your besties is totally OK.

Bringing too much drama into the relationship

If there’s one thing teenage guys hate, it’s drama. Don’t be the GF who constantly makes a big deal out of nothing, or who is always searching for the latest gossip. Go with the flow—some things are worth getting upset over, but remember to choose your battles––everything does not have to be such a big deal. We know lots of girls love to gossip, but try to mind your own business. Remember, curiosity killed the cat.

Is there anything major you’ve learned about relationships? Share in the comments below.