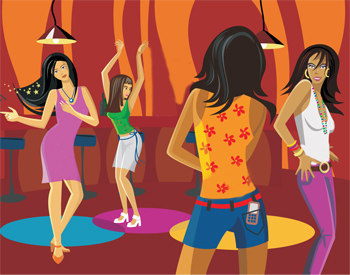 Are your sleepover parties full of the same ol', same ol'?
Punch up your next slumber party with these fabbed up takes on all your tried 'n' true sleepover classics.
Here's our fives faves...

Fab it up: Get your chicas to play top chef. Have everyone make their fave snack, dinner or dessert, and make like you're on your own cooking show. Pretend or ask the ‘rents to borrow the video cam and record it like a reality TV show. Have your pals bring recipes or get easy DIY ideas RIGHT HERE.

When everyone's food is ready, pass the dishes around and have a taste test. Once you've tried all the cool creations, each girl can vote for the most delish dish (secret ballot!). The winner gets a snazzy chef hat, obvi.

PJ Party Classic: Rockin' out to your fave tunes

Fab it up: Rewrite some slammin' songs. Put the name of your crush into a pop love song (“Hey there, Delilah” turned “Hey There, James Carey”?!) an old classic, a silly dance song, or go totally Taylor and scrawl your own lyrics from scratch.

When you're done composing, sing your song out loud, add some dance moves and throw a little concert. You can video tape or photograph this too for a good laugh later. Or, do it up American Idol - cast secret ballots and vote someone out each round. Then stack the remaining candidates against each other 'til you have a winner!

Fab it up: Sure, swapping beauty know-how is super fun but it stinks when you gotta wipe it all off before you go to bed. So, throw a sleepover with something chic that you can keep! Have all your besties bring old threads that don't fit anymore or accessories that they're soooo over. Ready...set...clothing swap!

More fun? Stage a fashion show with your new fab threads. Set down a red carpet, sprinkle some sparkles on the floor and walk the runway in your new (free!) finds. Grab your digi and snap some photogs while you're out there.

Fab it up: Let's face it...even the greatest rom com's of all time can get snoreworthy. Instead, have each of your sleepover sistahs bring a home video...the funnier the better. Pop them in at random and try to be the first to guess whose video is whose. There's bound to be tons of laughs and you'll get to know your besties waaay better.

Or, make your own piece of history. Tape a video diary of you and your pals. Write out some super silly interview questions (If you had to marry one of the boys in your math class who would it be? If you were stranded on a desert island and sentenced to eat one food what would it be?). Watch the whole thing tomorrow morning over pancakes and OJ.

Fab it up: Yeah, it's totally fun to spook each other out...but sometimes it can be a little TOO scary for some of our more sensitive sistahs. So, instead of telling the tale of Haunted Timmy's Tavern, why not predict each other's futures?

On a slip of paper write down a funny (or totally serious) fortune for each girl. Some of our suggestions: "You will be the hottest homecoming queen ever!" "You'll be the most likely to have your own reality show." Fold 'em up, put all the magical fortunes into a big box and get to picking your future. Once there's nothing left, read 'em aloud and get ready to giggle! Sooo much more hilarious than a fright fest.