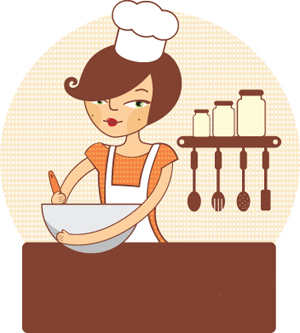 My nana used to make ice box cake for us when my brother and I were little. It's more of a pudding than cake, but it's great for days when you don't wanna bake (like in the summer). Here's my super-easy take on the treat. Whip it up the night before you're gonna serve it.

What You'll Do:
Make the pudding in a big bowl, following the instructions on the package. Put it in the fridge to chill. Then, place about 5-6 graham crackers in the Ziploc baggie. Use a spoon to whack the baggie, breaking up the crackers into a sand-like consistency. Be careful that the bag doesn't break!

Right before you serve it, cut up some bananas into thin wheels. Put a layer of them on top of the cake. Spread the Cool Whip on top. Wanna get extra fancy? Grate some dark chocolate in a box grater. Sprinkle it on top. Serve!