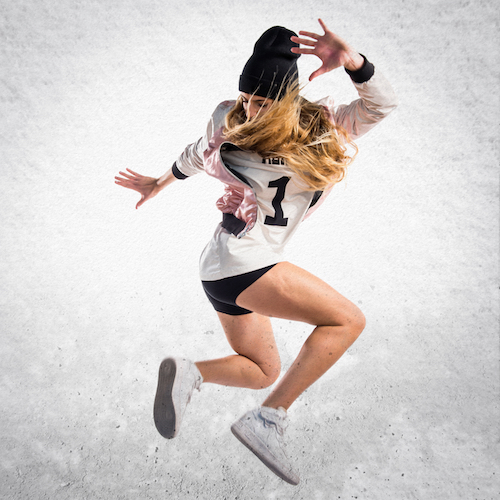 Since we live in the digital age, there are tons of free resources online to teach you everything from memorizing choreo to performing complex combos. Whether you want to try out for the dance team when your school reopens, or just stay active while staying indoors, these resources will have you moving to the beat in no time.

The Kidz Bop brand is known for their covers of hit pop songs, but they also craft dances to go along with their beats. Whether you want to dance along to a playlist or learn the specifics of the routine from a KIDZ BOP music video, their YouTube channel is sure to have a vid for you.

The Just Dance franchise started on the Wii back in 2008, and it's now available on the Xbox and Playstation systems as well. If you don’t own the game, you can find video clips like the one above on YouTube. The moves are easy to follow, and you can always restart the video to catch the moves you miss. Grab one of your sibs to help you rock the duets!

Want to copy the cool moves from Disney Channel’s Descendants 2? You can learn along with China Ann McClain, AKA Uma, in the vid above. Or, check out other routines from the movie, such as the “Chillin’ like a Villain” dance with Sofia Carson. There are also tutorials from a bunch of your other fave Disney flicks, like Zombies, the Hannah Montana Movie, and even a dance from the Broadway version of Aladdin.

Auti Kamal has worked alongside alums from So You Think You Can Dance, has a degree in Dance, and has been featured in major dance magazines. For those looking to learn the finer points of dance and technique, her YouTube channel is a helpful resource that breaks things down. Beginners and those looking to revisit the basics will enjoy her tutorials. As she emphasizes in the above video, practice makes perfect — even if that means trying things a million times to get them right.

Whether you’re into hip hop, contemporary or are just looking to get moving, you can learn from your fave stars like JoJo Siwa and the Make It Pop cast online. The routines are energetic, upbeat and fun to perform. Check out tutorials like the one above on the official Nickelodeon YouTube channel.

we got yelled at by security for blocking the stairs to make this😂 ##fy ##wishmeluck ##playlist tag who you see!

While not tutorials per se, the best way to learn a TikTok dance is by watching a video of the dance and following along. This can be tough for dances with faster moves, but with enough time and effort, you can soon be on your way to TikTok stardom. Check out some suggested dances here.

What are you waiting for? Pick a video and get moving!

What's your favorite style of dance to practice? Let us know in the comments!