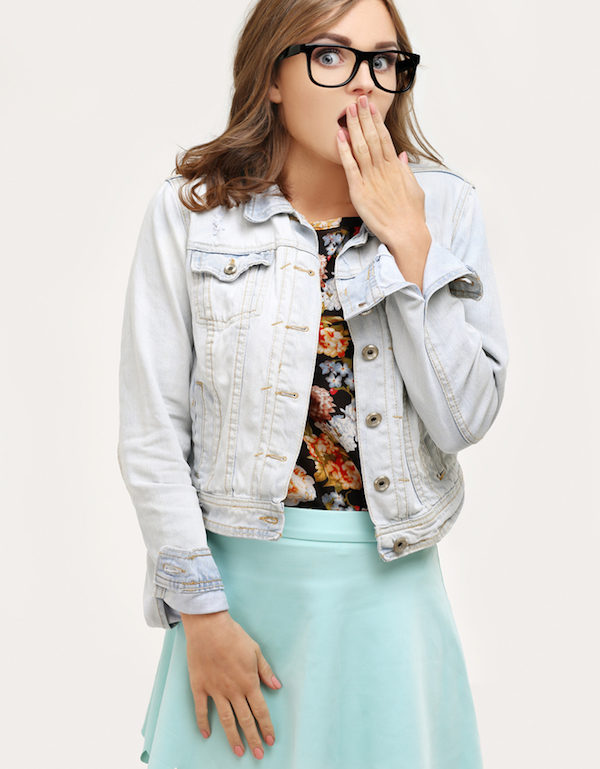 For us girls, periods are just a part of life. Once the initial shock of dealing with your first period is over, the monthly routine and its side effects become somewhat second nature.

And yet, we all have our fair share of embarrassing period moments. Even the best of us can’t escape Mother Nature’s wrath. Here are a few tales for real girls like you.

“When I was ten, my family and I were headed to Disney World for what I hoped would be the vacation of a lifetime. I remember feeling kind of sick that morning, but nothing out of the ordinary. Yet, of course, as we’re on the plane there, I get my first period in a cramped airplane bathroom with nothing but toilet paper to save the day. Luckily, I didn’t bleed through my shorts, but it was still awful. I felt like everybody somehow knew. My mom and sister had no products with them either, so I was left sitting in an awkward position for the next hour until the plane landed.”
—Marisa, 17

“I got my period pretty early. I think I was 9 or 10, so I’d been dealing with it for a few years before middle school started. It never phased me. I just dealt with it and carried on with life. I used pads just because I didn’t like the feel of tampons, but after this experience that all changed. It was a regular, boring school day and I ventured to the bathroom to change my pad. But, once I was in the stall, I realized that my pad had vanished. It was just gone. I got up and searched around the stall. I searched the bathroom. It was gone. I was so confused. Where did it go? How does a maxi pad just disappear? I ran out of the bathroom and quickly scanned the halls for the missing pad before I gave up and returned to class. To this day, the mystery of the pad goes unsolved.”
—Cara, 18

“It was my senior prom night. I was so unbelievably excited for prom and when I woke up that morning with my period, I was livid. It also didn’t help much that my dress was white. I did the best I could. I wore both a tampon and a pad and hoped for the best. It was actually the best night of my life until about 10 p.m. when I decided to make sure everything was still okay down there. I just remember turning to look at the back of my dress in the mirror and dying a little when I saw a pretty decent sized red stain. I honestly had no idea what to do. The bathroom had all sorts of emergency products, but nothing could fix this. I tried to clean it with soap and water. The stain only got a little lighter, but it was definitely still visible. I eventually gave up trying to cover it because there was no point. I realized that no one would really notice if I was dancing, so that’s what I did for the rest of the night.”
—Lily, 18

“I got my period when I was on vacation with my family in Cape Cod a few summers ago and just dealt with it as usual. We went down to the beach at around 11 a.m. and usually left at around 4 p.m., so I figured a tampon would do. My sister and I headed into the water after lunch. I just remember looking around and noticing that the water was kind of pink. I thought nothing of it until I realized where it was coming from. I played it cool until we got out and just wrapped a towel around my waist until we headed back to the house. When I checked, the tampon wasn’t there. It just fell out in the ocean. I’m not sure how it happened, but it hasn’t happened since. Still weird though.”
—Anna, 18

“I got my period in a random Pizza Hut while heading home from a family vacation in my dad’s hometown. Unfortunately for me, my mom didn’t come with us. I think I was 10 years old or so. On the way home, we all got hungry and stopped by the nearest restaurant, which was a Pizza Hut in the middle of literally nowhere. Quite frankly, I don’t remember the pizza or the breadsticks. However, I do remember the odd feeling of wet underpants and the sudden need to run to the bathroom. And what happened next? You guessed it, my period had arrived. Cool. What was I, a ten-year-old anxiety ridden child, supposed to do? Well, I quickly shoved some toilet paper into my underwear and hoped for the best. I didn’t tell a soul. I just sat awkwardly in my seat hoping that my family would finish the pizza and we could get back on the road. And that’s that. It’s not the worst, but it still haunts my mind every now and then.”
—Hayley, 18

Needless to say, sometimes periods suck. And embarrassing moments like these don't make it any easier to deal with our monthly anguish. But, just know that you’re not alone in your struggles—we all have our run-ins with Mother Nature’s disasters and, luckily, they only make us stronger.

Do you have a period horror story? Share it in the comments below!