Put that friend fight to rest. Here’s how

Be the bigger person

Although being the bigger person is never easy, it's the right thing to do. Nobody ever wants to be the first person to bring up the elephant in the room, but someone has to do it. Once you feel brave enough, call your friend and ask her to schedule a FaceTime so you can talk things out. You could even ask her to meet in person to talk socially distanced. Once you do this it'll definitely make you feel a lot better. This way the silence is broken and the awkwardness is out in the open. The ball is now in your court because you're the one that was brave enough to speak first. So take advantage of that to speak about everything that's been bothering you when you speak on the phone or meet in person. Tell your friend how you truly feel about the fight you guys had, and don't leave anything out!

Things to avoid doing in the convo

The biggest mistakes you can make are yelling at them, talking too much like a firm parent or teacher, not being truthful about how you feel or giving off an energy that you don't care about them or the conversation you're having. Make sure not to accidentally do any of these things when talking to your friend. Sometimes it's hard to avoid when you're in a heated conversation.

Let your friend have time to speak

After you speak, its important to listen to your friend and hear what they have to say. There are two people in a friendship so be sure to hear them out. The worst thing you can do is interrupt them after you've spoken. It wouldn't be fair to have them listen to you without you reciprocating the same respect back. Remember that if you're thinking about what to say next—you're not *really* listening.

Once you both have said your piece, the next thing you have to do is hug. So lean in for that *mushy* socially distanced air hug with your bestie, or if you're FaceTiming give her that *loving* virtual hug. This might seem silly, but don't underestimate the power of a hug. Hugs always make everything better. If there's even a little bit of awkwardness unresolved, the hug will take care of any last pieces of tension. If you want to go above and beyond, make plans to have a Zoom Netflix hangout next week. This way the focus of your friendship is no longer on the fight and instead it's on the new and exciting plans you have together.

What strategies do you use to put a friend fight to rest? Let us know on IG @Girlslifemag!

Everything can change in a year 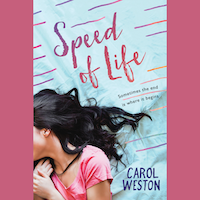 Sofia, feeling sad and stuck about her dad starting to date again, emails an advice columnist and is amazed when Dear Kate answers. What neither of them knows? Dad’s date is Dear Kate. Speed of Life will make you laugh and cry. Enter here!