The Unknown Bully - A true story about bullying 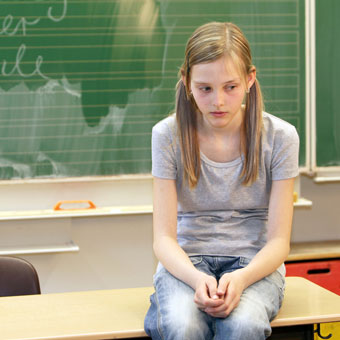 Throughout the month of October, we’re publishing your stories about bullying to spread awareness and stomp it out. Here’s a totally true tale from a real girl just like you.
The Unknown Bully

Usually, bullies physically or emotionally hurt you. My bully didn't start out that way. When I was in first grade, my grandma died. The day of the funeral was the “hundredth day” in my first grade class; a day where you bring in a hundred things and do other things with the number one hundred. And since I went to a Catholic school that had a church my family regularly went to, the funeral was held at my school.

The next day was when the "bullying" began. I received little sympathy from my teacher. No one had said a word to me for the entire day. No "I'm sorry" or "Are you okay?" I was left in my own little world to contemplate this situation, and that's when a bully developed inside of me. That's right. I became my own bully.

The bully inside had told me I was pathetic and no one talked to me because I had missed a hundredth day and none of them liked me. I was crushed by my own thoughts that I thought were true. I did what I thought everyone would want me to: Not talk. I don't know how I would have ended up if someone had said something to me that day, but from then on, I remained silent. I only spoke when I answered a question in class. I secluded myself from everyone else, I cried more often at home, I would be alone and okay with it, and I started to rip some of my hair out.

As I look back, I knew I was going through depression, but saw no way out. I continued to be silent for years and everyone thought it was because I didn't like anyone, when I thought it was the opposite. My silence, though, became an issue. My parents forced me to do things that would encourage to me to talk to people, but it only made me feel worse about myself and made the bully inside stronger.

It hit a record low in sixth grade. By then, I was known as the quiet girl. I was accustomed to being picked last on teams and was always left out of the circle. But this is when all the girls turn into junior high girls. In my opinion, they are worse than high schoolers because, in junior high, you are preparing for high school and want to be "cool" once you get there so you'll do everything to be cool, even tear other people down.

I was bullied a lot that year, by real people and myself. I cried more that year than I had ever before and I had prayed every night to God that I couldn't take living anymore. It got to the point where I didn't want to bare this pain anymore and thought about cutting myself. Fortunately, I never did. Why? At the time, I was too scared to but now I realize that I wanted to give life another chance.

After sixth grade ended, I decided to be more outgoing. I wanted to erase my inner bully. I spread my wings a little each day, and by the time I went into high school, I was able to make friends the first day back. As a sophomore, I am surrounded by people who make me feel good about myself. I have locked up the unknown bully for good. To those who deal with an unknown bully, know this: You are never alone.