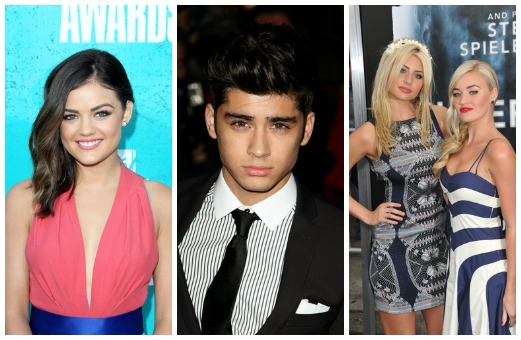 The weather was so HOT everywhere this week and we’re glad the celeb gossip was just as smoking. From music to tattoo-getting celebs to our fave couples, LA’s got it going down. But not all news was good news this week. Find out what’s going on in Hollywood below.

OMG did Zayne get a tat of GF Perrie?!

One Direction was rolling through Maryland this week, home of the GL HQ (couldn’t they have stopped by?), when they dropped into a tattoo shop. Zayne reportedl got a tat of his GF, Little Mix singer Perrie Edward’s, face! Here’s hoping they don’t break up anytime soon.

Kristen’s roadtrippin’ with BFFs while Rob’s where?

Despite earlier reports that they were spotted holding hands, R-Patz and K-Stew are still doing their own things. Cutie Rob was spotted throwing a Great Gatsby-themed bday bash this week at his house for a friend and everyone who’s anyone went. Meanwhile, Kristen took a road trip starting in LA, going all the way to the south! She even got her first tattoo in Nashville. Coincidence that she skipped town while Rob through a fun party she wasn’t invited to? Probs not. What do you think K’s tattoo is? Do you think Robsten will remain friendly? We hope so!

Aly & AJ are staging a comeback

GL cover gal’s Aly and AJ are finally ready to make a musical comeback under their new name 78violet. The singing sisters performed a show this week at the Roxy in LA and from what we hear, their new tunes are totally cool. Check out their new album when it hits next month.

Who are Hollywood’s most powerful celebs?

Forbes Magazine debuted their annual Most Powerful Celeb list this week. Who ranked #1? None other than Oprah, of course. But some of our fave celebs landed on the list, like Taylor Swift, Jennifer Lawrence, Justin Bieber, Katy Perry and more. Who do you think is the most powerful celeb out there right now?

Some really sad news coming from Hollywood this week for Demi Lovato. Her dad Patrick, who had been battling cancer, passed away earlier this week. Demi and her dad had an estranged relationship growing up, but the starlet put on a strong face when she took to Good Morning America to announce that she is starting a scholarship for mental illnesses in honor of her dad. Stay strong, Dem. We love you!

Lucy Hale has a new BF

The PLL star opened up about her new dude this week and we couldn’t be more excited. His name is Graham Rogers, most famous for his role on NBC’s new show Revolution. Lucy dished, “He is such a sweetheart. We are having a good time. We started out as friends. He is a good guy, and I am past the bad-boy stage." We can't wait to see more of these cuties.

Selena hangs with her sis

Yay! Selena Gomez was spotted for the first time with her new baby sister Gracie Elliot this week. She’s totally adorbs and Sel seems to be the most perfect big sis. Check out this photo. It’s too cute not to see. Check out the photo below it's too cute for you not to see!

Love this post? You'll heart these too...
+ Hot tunes for your 4th of July bash
+ Get the latest on the Hollywood gossip
WIN BIG! Score an Amazon Kindle with $350 worth of beach reads!
MAJOR PLUS! GL is now on Google+ and Instagram. Fab!