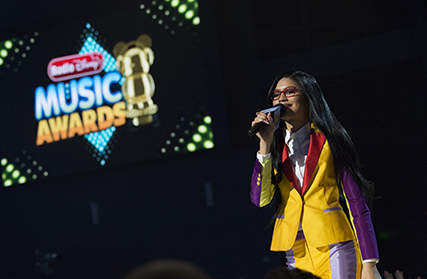 After the Radio Disney Music Award ceremony on Saturday night, featuring performances from some of the coolest musicians in the biz right now, we got the chance to watch it all on our screen on Sunday. With Zendaya as our amazing host and other incredible presenters, this award show was better than it's ever been and we've got the full scoop here.

With performances by Nick Jonas, Becky G, Shawn Mendes, Sheppard, Fifth Harmony, R5 and Sabrina Carpenter, the musical night was a total hit, and host Zendaya showed off several stylish outfits, taking the evening to the next level. Even more stars took the stage to present, with Fifth Harmony, Carly Rae Jepsen, Chelsea Kane, the Teen Beach 2 cast and the Black-ish cast amongst the celebs who gave out awards. Most importantly, though, the winners were...

They're The One – Best Music Group

He's The One – Best Male Artist

She's The One – Best Female Artist

The Bestest – Song of the Year

"Can't Blame a Girl For Trying" by Sabrina Carpenter

You're So Fancy! – Artist With The Best Style

So Happy – Best Song That Makes You Smile

Move! – Best Song To Dance To

"Shake It Off" by Taylor Swift

"The Heart Wants What It Wants" by Selena Gomez

This year's Hero Award went to Jennifer Lopez to recognize her philanthropic efforts with the Boys & Girls Club of America and her own organization The Lopez Foundation. Radio Disney also recognized Maryah Sullivan, 19, and Sloan Peterson, 10, for their awesome work giving back to their communities and the world around them.

Did your favorites take home an ARDY award? Who were you rooting for? Let us know in the comments below.