Did Justin and Selena record a song together? 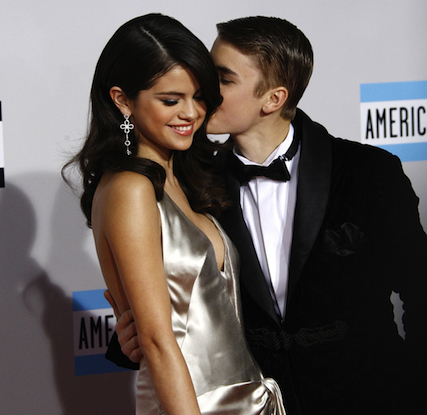 Selena Gomez and Justin Bieber famously dated on-and-off for years starting in 2011, but recently it seemed like things were finally done for good. After what happened this weekend, though, we're not so sure.

On Saturday, news hit the internet that the two exes had recorded a song together called "Strong"—and a leaked copy even started making the rounds. According to Us Weekly, "Strong" debuted on Drake's OVO Sound Radio and fans immediately started freaking out.

Though neither Justin or Selena have confirmed that they recorded a duet, and all online copies of the song have been taken down or deleted (bummer), several videos claim it's due to copyright restrictions on UMG (Universal Music Grup, AKA Justin's label) material. And if you read between the lines, that means "Strong" might just be appearing on Justin's upcoming album Purpose, dropping November 13th.

We managed to listen in to the tune before it was scrubbed from the web, though, and lyrics include like lines like, "What should I do? Should I go? / Who do I talk to? Nobody knows," from Justin and, "Wishing I was better at this thing / Cause it's just been too long and I can't change," from Selena. Check out the full lyrics here.

So what does this mean for Jelena exactly? We're not sure, but it seems like it could hint at a romantic reunion (if their relationship is "Strong" enough to overcome all the obstacles that they've faced through the years) or a newly-minted friendship (it takes serious strength to realize when a relationship isn't working and move on from it).

We're not sure what we're hoping for when it comes this couple, but as for "Strong," we're crossing our fingers that we'll be hearing it again soon.

Did you hear "Strong" before it was taken down? What do you think of Justin and Selena working on a song together?