These international bands and singers *need* to be on your radar

Some people find a band they like and stick with them for a loooooong time (we're talking years upon years). Branching out from your set music taste is daunting, but hear us out, it's *totally* worth it. 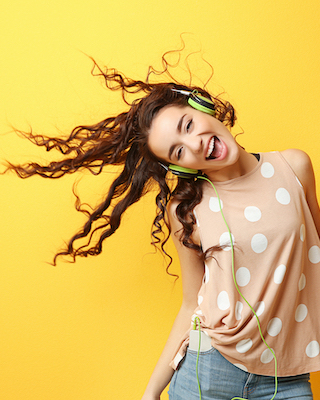 And hey, go big or go home, right? Check out the *best* international bands and singers below—because you don't need to speak the language to recognize a good song.

This French duo might sound familiar to you—their hit Amour Plastique went viral on Tiktok earlier this year. Adele, an actress and Youtube star, writes the lyrics and her similarly musically minded BF Matthieu composes their songs. These 19 year olds are not only bandmates—they're also BFFs and soulmates, and their catchy songs can only be described as bittersweet, with poetic lyrics capturing *every* emotion that comes with love. Swoon!

On the hunt for a new indie band to fill your playlists with? Look no further. This alternative French band (whose name roughly translates to "Grief Shark") packs a punch; a nostalgic sound that will make you want to relive those warm summer nights out on the beach with you friends.

This sister duo is what you *need.* Genre defying, they dabble in folk, indie, punk rock and country...and sound *amazing* in all. They've been recognized by Rolling Stone and have even been nominated multiple times for a Brit Award as one of the five best international groups.

Rapper Luiz Lins's smooth voice is the *perfect* thing to jam out to (late night mirror concerts with a hairbrush microphone, anyone?) Even cooler? He's one of the *top* emerging voices on Brazil's R&B scene.

Jamaican reggae singer Koffee, 20, has been making waves in the U.S. music industry by winning Grammy Awards and earning a spot on Harry Styles postponed Love On Tour. Listen to Koffee's hit single "Toast" to get you in a beachy, island mood.

Dubbed the next "Nation's Girl Group," Twice is the best-selling Korean girl group of all-time. The nine member group are famous for their quirky, girly-girl concepts and dance routines. Twice recently released their sophomore album Eyes Wide Open following a new, mature approach. Check out their newest single "I Can't Stop Me".

The group's name Aespa is a combination of "ae" the English initial of Avatar and experience. Group members have a virutal counterpart or "avatars" that perform with them on stage and in music videos. The quartet debuted in early November with their single "Black Mamba."

The five piece Japanese/Korean group is part of a unit of a global idol development project launched by Yoonhak, leader of South Korean group SUPERNOVA. Listen to their ah-mazing single "Santa Monica".

Don't hesitate to add foreign music to your playlist just because you don't understand the language. Not only will you feel more connected with the world but you gain a better undertanding on what other teens in different countries are listening too.

POSTED IN music we love, music, TRENDING, Must List