Why I told the world I'm autistic 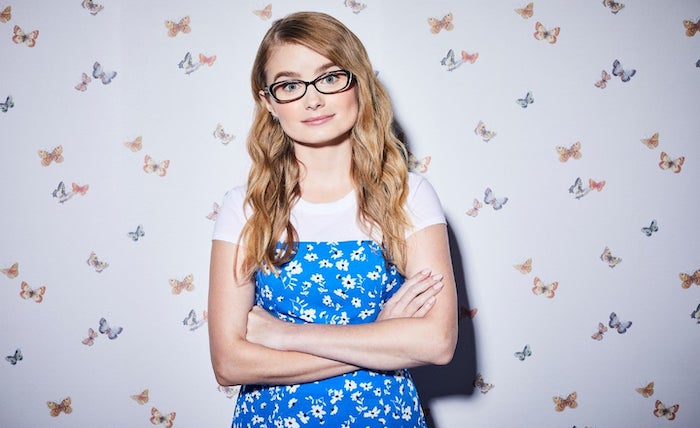 As the first actor with autism to play an autistic character in a leading role on a TV series, Kayla Cromer crushes stigmas and shines as Matilda on Everything’s Gonna Be Okay (new episodes every Thursday at 8:30/7:30c on Freeform). Here, Kayla shares her story—and why she decided to become an activist for people on the spectrum.

On the show Everything's Gonna Be Okay, I play Matilda, who is on the autism spectrum. This is a big deal: Autism spectrum disorder (or ASD, for short) hasn't been represented much on TV at all, and characters who do have ASD have almost always been male. While I'm proud to be on such a groundbreaking show, being cast as Matilda meant so much more to me than just playing a cool role.

You see, I'm on the spectrum, too, and a year ago, I made the decision to tell the world about it. On a personal level, it was just about sharing my truth and being honest about who I am, but I knew it would be a big deal to others with ASD. Even though lots of people are on the spectrum (probably way more than you realize), no other actor in my position had opened up about having autism before.

My journey with ASD started in elementary school. I was really young, but I was already aware of how different I was from my peers. Things that seemed to come easily to everyone else just didn't for me. During timed exams, I could hear my classmates putting down their pencils because they were finished with the test, while I was still writing furiously, trying to complete my work. When it was time for reading circles, I'd often have to leave because I was too slow to keep up.

And socially, I felt a difference, too. Things like humor and metaphors went right over my head. Other kids would tell jokes and, while everyone else was laughing, I would just stand there, straight-faced because I didn't get the punchline. If someone asked me, "Why is your head in the clouds?" I'd reach up and actually touch my head, looking for the clouds they referenced. I just didn't understand that they weren't being literal. I could tell I was different, even if I didn't know yet why I wasn't like everyone else. I felt so sad and confused.

My parents realized I was different, too. They took me to a neuropsychologist who was able to help me (and the rest of my family) understand what was going on. When I was 7 years old, my doctor realized I had several learning differences, including ADHD, dyslexia and dyscalculia, where your brain has difficulty processing math problems. It wasn't until later that I was diagnosed with autism.

Specifically, they determined that I have Asperger's syndrome, a kind of autism that's considered part of the spectrum since 2013. People with Asperger's tend to have a hard time with social interaction and often have very focused interests and thrive on strict routine. Because autism exists on a spectrum, though, not every person with the diagnosis has the same symptoms.

I wasn't upset when I learned I was on the spectrum. Actually, it was a relief.

Being on the spectrum has never held me back from pursuing my dreams. I caught the acting bug when I was little and saw Pirates of the Caribbean: The Curse of the Black Pearl for the first time. I was obsessed. I played out parts from the movie for months. With my parents' support, I found an acting coach.

When I began acting, I wasn't ready to share that I was on the spectrum, so I hid my condition well in work situations. But it wasn't easy. This business is stressful enough under the best of circumstances. Another reason I kept my truth to myself? Honestly, I was afraid of being typecast. I didn't want to be put in a specific box when there are so many roles I'm capable of playing—not just characters with ASD. But when I came across a post on a casting site for the role of Matilda, that all changed. The creators were looking for an actress who was on the spectrum to play the character. I knew I was perfect for it.

The casting process was intense, amazing and long, but I loved every minute of it. It was totally worth it to get the opportunity to bring Matilda to life. I felt it was a chance to let others in on life on the spectrum—and squash some of the stigmas attached to it. So many people assume we aren't capable of empathy, or we can't build close relationships or contribute to society. People with ASD might be quirky or have trouble understanding sarcasm or metaphors, but we're also genuine human beings who just happen to see the world through a different lens.

So, with the support of my family, friends and the rest of the cast, I found the courage to talk publicly about living with autism for the first time. As scary as it was to share my ASD diagnosis with the world, it has been so worth it.

Yes, I did receive a few comments on social media, like the people who say things like "she's too pretty," or, "too high-functioning" to know the real struggles of living with ASD. I know there will always be haters judging me—I'd have to deal with them even if I wasn't on the spectrum. I refuse to let negative people impact me because I believe in my journey. Besides, I've received so much more support than negativity. I've heard from so many others in the ASD community who are proud of my strength and say I'm giving them a voice and paving the road for others on the spectrum.

And for me, that's the most important and amazing thing about playing Matilda. I have always wanted to use my career to make a difference. I'm so happy that the timing is finally right, not just for a show like Everything's Gonna Be Okay, but for an actress like me to emerge.

People with ASD aren't the only ones who have to deal with challenges in life. We all come up against struggles at some point. For me, accepting my personal differences and facing challenges with determination and a solid support system has been the key to everything.

When I was getting started in acting, my coaches gave me some advice that's been important in every single aspect of my life. They said all I needed was to embrace the real me. As an actress, that led to me opening up about my ASD with the world, but it's advice that applies to everything we do. No matter who you are, or what you want to do in life, embracing the real you is the first step to making your dreams come true. When you're true to yourself—and surround yourself with people who really believe in your potential—anything is possible. I'm proof.

Editor's Note: A version of this story was printed in our February/March 2020 issue misquoting Kayla's abilities to memorize lines and figure out her character. We apologize for this error.