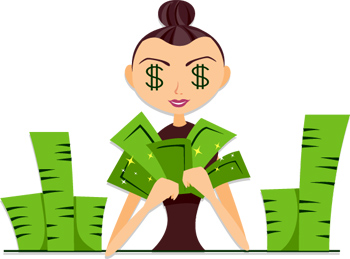 "I just started babysitting so I don't know what's fair, but I think I'm being underpaid! How can I speak up without sounding greedy?"


Take it from one babysitter who's been around the block—at some point in your babysitter career you WILL be taken advantage of and be underpaid! It's up to YOU to make sure that doesn't happen.


So what to do? GL's got ya covered on addressing the issue with tact and confidence.


When you're offered a job (don't forget it's a job) to babysit, be up front about your pricing. At some point in the initial meeting the parents will most likely bring it up. If they don't, then step up to the plate and start that convo. Not only will it address necessary details, but the parents will see that you're responsible and confident (great traits for any babysitter!). Once you've got a range to deal with, stick to it and you'll be the most respected, in-demand sitter on the street!


So what's reasonable? Talk to your 'rents about this first. Ask them what they paid babysitters when you were younger and see what they think is fair. Talk to friends and relatives who also babysit to see what the going rate in your community is. It really can range from low to high depending on where you live so don't go into the negotiation totally clueless! Once you've done a little background research, determine you what you think is fair for you and stick to it.

Qs to ask yourself


If you're in your later teens, parents are prob willing to pay you more than younger girls, which is reasonable because they'll most likely rely on you to hold more responsibilities.

"How long have I been babysitting?"


Experience really does play a role in determining a salary for any job. If you've been babysitting for a few years now and consider yourself a pro, then it's understandable to ask for more money. If you're new to this and learning on-the-go then you probably have to wait until you gain experience and you can start earning more.

"How much do I need this money?"


For girls who are babysitting to earn a living—that is they need the money to contribute to fundamental needs like food, necessary clothing, tuition and other household-type expenses—they'll probably be willing to go either way on the scale. On the one hand they really need the money so even if it's little money, it's better than nothing! On the other hand, they NEED the money so the more the better!


For the girls that are babysitting to earn money for an extra pair of boots or to buy tickets to crucial concerts, they'll probably be more flexible in their salary requirements. The key in figuring out which side of the fence you fall on is when you ask yourself this, weigh all the options and determine what you will and won't accept.


Once you've talked to your 'rents and friends and determined what factors are important to you, pick a salary range to offer potential babysitting families.


Decide what the highest amount of money you think is fair per hour. It's OK if it's a little higher than you'd expect because it's the top of the range so it's what is expected. The parents will understand that. It doesn't mean you won't sit for anything less, it just gives them a comparable price to decide on an ideal salary.


Then, pick the lowest amount of money you'd babysit for per hour. This number is very important and should be thought about very hard. This is the number that you absolutely will not babysit for unless they accept it. You MUST stick to this range when you talk about pricing with the parents. Chances are, the parents will pick a number that's in the middle, more likely on the lower side. Make sure your ideal number is in there, but be willing to be flexible on either side. And it's always okay to say "no" to a gig, so don't sweat it if the 'rents tell you they can't afford your price. Stand your ground, girlfriend and make sure you're not taken advantage of!

Be confident about asking for cash


Don't be intimidated or embarrassed! The "salary convo" can be a little awkward but if you're in the know and are confident when you talk about it then you'll be fine. Remember, you're offering them a service.


Take into consideration how many kids you'll be sitting for and what their ages are. Babies who need to be spoon-fed and have their diapers changed are more work and responsibility than older children. Five kids are a lot more work than one so keep that in mind, too! If the little ones are going to be sleeping for most of the time you're going to be there, consider offering a lower range since you'll most likely be watching TV! If you're going to be there for a lot of hours (says more than eight) a lower range might be in order since shelling out big bucks for that long can be a lot. But this is totally up to you and depends on what the job deets are!


If for some reason the parents don't pay you the agreed-upon price, politely but confidently ask them to talk about it (always away from the kids, of course!). Say, "I thought we had agreed on a price but what you gave me was a different amount. I don't know if it was a mistake or if there was miscommunication so I just wanted to clear it up." When the 'rents figure out that there's no messin' with you, you can rest assured that it won't happen again.


You are offering the parents a service, your time, effort and energy. It's not okay in any other job out for an employee to be underpaid, so don't think babysitting is any different. Get out there and earn those dollar bills, babysitters!

POSTED IN how much should I get paid