The Top 9 selected songs from the most popular iTune downloads to date. Hopefully their picks will help them to the next round. The variety of current singles had me singing along with the contestants, though some of the idol’s renditions did not go too smoothly.

Anoop Desai started the show singing Usher’s “Caught Up.”  The song was a bad choice; it did not showcase Anoop’s vocal talent nor did it show his true colors as a performer. He was also pretty motionless to be singing such an upbeat R&B song (c’mon Anoop, show us those moves!). The judges agreed that the song choice was not a good one and he should have worked the stage more. Simon went a little farther and expressed that the performance was a “complete and utter mess.” B

Second was Megan Joy singing the Bob Marley hit “Turn Your Lights Down Low.” After this performance, I think Megan may be in danger of being in the bottom 3. The song was not a good fit for her and she is starting to become a tad monotonous. Cara seems to think Megan is in trouble, while Paula thinks that a simple stool might do the trick. B-

Danny Gokey went third singing “What Hurts the Most” by Rascal Flatts. This is totally one of my fave songs and I was thrilled to see Danny pull off such a passionate performance. He emotionally connected to the song from the very first line and each verse became more and more powerful. The judges agreed that it was one of his best performances to date! A

Next was Allison Irahetta singing “Don’t Speak” by No Doubt. This was Allison’s first time playing the guitar, so she appeared to be a bit nervous during the first verse. After the initial nerves drifted away, Allison took off like the true rocker she is. She impressed me with her strong vocals, though the judges seemed to be distracted by her loud outfit. Hopefully Allison makes it through to next week and tones down her ensemble! A- 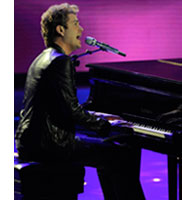 Scott MacIntyre gave a strong performance singing Billy Joel’s “Just the Way You Are.”  His vocals sounded amazing and this song selection was definitely a smart pick for Scott.  Paula expressed that she is most proud of him and apparently so was Simon—stating that it was one of the best performances. A

Next up was Matt Giraud singing “You Found Me” by the Fray. I think that Matt’s vocals sounded great, although he rushed through the beginning of the song just a bit. The judges, on the other hand, thought the performance was uncomfortable and not very original. While I don’t think that it was one of Matt’s better performances, I think the judges could have given his vocals a little more credit. B+

Lil Rounds hit the stage singing Celine Dion’s “I Surrender.” I think that her voice sounded strong (as always), but I found the song to be boring and old fashioned. I agree with the judges that a more current song (preferably a Mary J. Blige hit) would have done her more justice. B+ 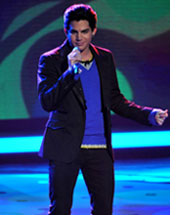 Adam Lambert rocked the house singing “Play That Funky Music.” He totally seems to be completely comfortable on stage and always stays true to his rocker side. He made the song sound current by putting a new spin on it and Paula even said that he was up there with rock star Steve Tyler. After such an awesome performance, Adam should def roll through to the top 8. A+

Last up was Kris Allen singing “Ain’t No Sunshine.” This was hands down my fave performance of the night. Kris surprised the judges (and myself) with his piano playing skills and gave an amazing and unique rendition of the song. Cara had 3 words for Kris “That is artistry” and Simon added that it was a great arrangement. A+

I have to say that the performances by the Top 9 were overall entertaining and especially exciting because I could sing along to all the songs performed. While I think that some contestants will sail through to the next round, the song choices of others may end up resulting in a goodbye. My picks for the bottom 3 are Megan Joy, Anoop Desai and Lil Rounds. What do you girlies think? Share your thoughts!