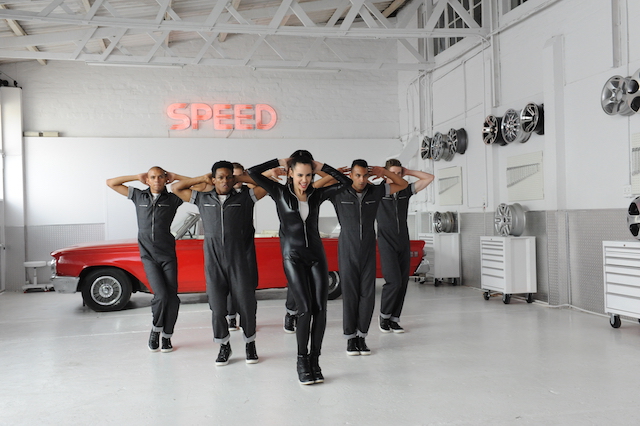 Sofia Carson: first you knew her as Chelsea on Austin and Ally, then as Evie in Descendants and even more recently as Lola in Adventures in Babysitting. But you haven't *truly* seen Sofia until you've watched her take on the coveted and beloved Cinderella role of Tessa in her new flick A Cinderella Story: If The Shoe Fits, out on DVD today.

The majorly talented 23-year-old actress filmed her latest flick in beautiful Cape Town, South Africa, which she gushed about during her chat with GL. "I know it's far, but you have to, at some point in your life, make it to Cape Town. It’s a really magical place and there was a kind of magic in the air while we were filming everything," Sofia shared. There, she worked alongside complete cutie (and our current crush), Thomas Law, who portrays the role of The Prince in the movie. Get just a taste of her talent and their chemistry in the exclusive clip below...

We chatted with Sofia about her time playing Tessa, her endless talent and her costar Thomas. Read on for the inside scoop.

Girls' Life: Playing the lead in the next A Cinderella Story installment must be so exciting—tell us about your character Tessa.


Sofia Carson: She’s a girl who’s been through a lot of loss and suffering. She lost her parents when she was very young and then lives with a miserable step family. But Tessa, despite all the suffering and loss that she’s been through, is very courageous and is a really beautiful soul.

GL: Did you find while filming that you and Tessa are similar in any ways?


Sofia: Yes, completely. Tessa follows in her dad’s footsteps of being a mechanic and even though she’s a mechanic, she has bigger dreams. She dreams of performing on big stages. She loves losing herself in a song or in a dance, and I’ve always loved music and dancing. Tessa also follows her dreams in this movie, and I’ve been lucky enough to follow my dreams as well.

GL: What do you love about Tessa?


Sofia Carson: There’s no prince and white horse coming to save her—she jumps on her own motorcycle and drives off into the sunset and makes her own happily ever after come true. And I think that’s a really beautiful message about girl power that Tessa teaches us all.

GL: Was it difficult to juggle acting, singing and dancing in one role?


Sofia: Yea, it was a very physical role, but I really, really loved being able to do everything that I love. We had about a month of prep where we were just in the dance studio for hours and hours on end learning choreography. Michelle [Johnston, the film's director] literally tailored every piece of choreography to my body, which is incredible.

GL: What's your *fave* musical number in the movie?


Sofia: One of my favorite songs is “Why Don’t I,” which is Tessa’s theme in the movie. It’s this beautiful ballad about taking a risk and following your dreams. The song kind of tracks her journey as a girl and how she finds the courage to really go after her dreams.

GL: Let’s chat about your costar Thomas. Was it fun to work with him?


Sofia: It was! Tom is a really, really experienced actor. He’s had a lot of experience in television, film and theatre back in London. So it was great to work with him and to bounce off of him. He did a really great job at bringing Prince Reed to life.

GL: Cinderella is such a classic film—are there any other classic movies that you would love to recreate?


Sofia: I love this trend that’s happening right now of recreating classics. I’m so into it. I really love Esmeralda from The Hunchback of Notre Dame, so I think that would be a really beautiful one to remake.

GL: What’s it like to be a part of the A Cinderella Story family? You spilled your adorable Hilary Duff story with GL in your June/July cover story, but have you had the chance to chat with Selena Gomez or Lucy Hale about your role, too?


Sofia: When I first got the phone call, I really couldn’t wrap my head around it. You know, we’ve all adored every single one of these movies from Hilary Duff to Selena to Lucy, and for me to be the next Cinderella…it’s just surreal to just be in that legacy. I actually haven’t met Selena or Lucy yet but I’m huge fans of theirs, so hopefully when I do we’ll talk about that.

Are you excited to watch Sofia slay in A Cinderella Story: If the Shoe Fits out *today* on DVD?