Adriana Camposano spills all on her new role in Chicken Girls 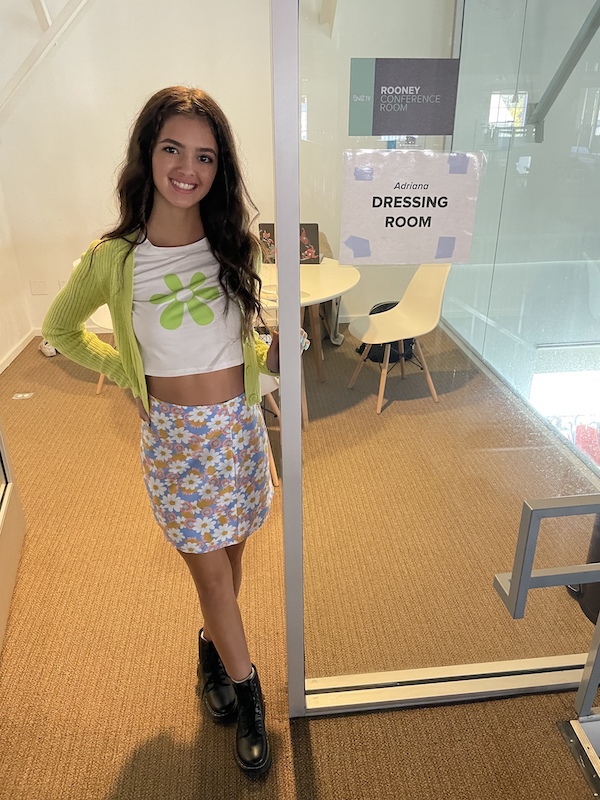 We all know and *love* Brat TV's Chicken Girls. We recently got the opportunity to talk with one of the newest stars of the show—Adriana Camposano. Adriana will be playing a new character, Poppy, in the upcoming season—and we truly can't contain our excitement. Of course we had to get *all* the deets from Adriana about her new Chicken Girls role and her acting journey.

Girls' Life: What was your initial reaction when you found out you were joining Chicken Girls?

Adriana: I was so shocked because everything happened super fast. I remember getting the audition—I was at Six Flags with my friends when I heard. The next day I found out I got it. I flew out to LA to film the week after. I actually watched this show when I was in middle school, so now that I'm able to become a character? It's super awesome.

Girls' Life: How would you describe your character, Poppy?

Adriana: I would say Poppy's very hippie. She's always radiating good energy and is super optimistic. She's that friend who will make a stupid joke but everyone still loves her because she always brings such good energy to the room.

Girls' Life: Would you say you relate to Poppy?

Adriana: I could say we relate in a sense. I'd say I'm a pretty optimistic person but she's more in her own world. I'm not very much like that. I can definitely see some similarities just in being someone who is always positive and wanting to spread good vibes out to everybody.

Girls' Life: What are you most excited about with joining the cast of Chicken Girls?

Adriana: I was most excited just to be acting again, it's been so long since I've been able to act with everything being shut down—so that was my favorite part. But now that I've actually experienced it, one of my favorite things is just being behind the scenes and meeting the cast and making friends. Everyone is super great on the show, so it's been such a fun time.

Girls' Life: What inspired you to start acting?

Adriana: I started acting when I was five years old. As a kid, I was always super out there and energetic. I loved iCarly and I would always tell my mom that I wanted to have a web show like Carly and Sam. I even cut bangs because I wanted to look like Sam. I've always been inspired from shows I've watched, and now here I am!

Girls' Life: What advice would you give to girls who want to start acting?

Adriana: My biggest advice would probably be to not take rejection to heart. I've been acting since I was five years old and I have not gotten every single role I auditioned for all those years. When the right one comes it will come—but you just have to take every opportunity and put your all into it. If you don't get it, you just know that you need more practice but don't give up because there's gonna be something out there for you.

Parts of this interview were edited and condensed for clarity.