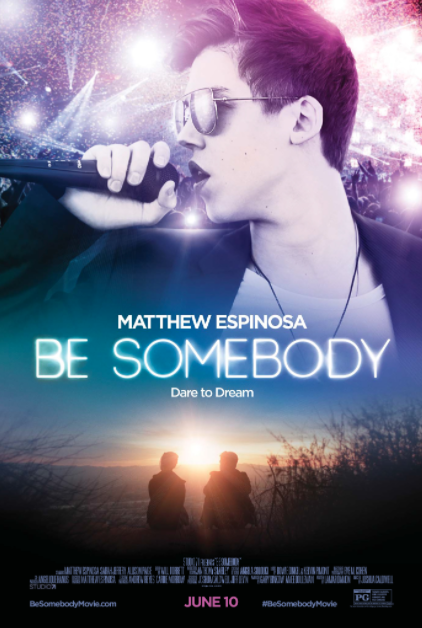 After a long week at school you and your bae just might not be up to going bowling, out for dinner or to the party your friends are at. Sometimes you two just need a date night in, complete with cuddles on the couch, popcorn and, of course, a great movie or TV show. But with so many choices on TV and Netflix how are you supposed to pick the perfect one? Here’s eight new and old school romantic movies and bingeable TV shows that both you and your other half will enjoy.

One of the sweetest teen movies to come out this year is Be Somebody, in which Jordan Jaye (portrayed by social media star Matthew Espinosa), a teen pop star, meets small-town high school art student Emily Lowe (Sarah Jeffery). Over the course of several days, the two embark on a journey that neither expected to go on together; during, they discover friendship, freedom and first love, proving that maybe opposites really do attract—and that you should never judge a book by its cover. You and your sweetie will fall in love with gorgeous California (no spoilers, but the sunrise scene is *gorg*) and Jordan and Emily's love story.

Once Upon a Time

Fairy tale legends and modern life collide in this TV series that is perfect for a Netflix binge with your cutie. The series takes place in the town of Storybrooke, in which the residents are actually characters from various fairy tales and other stories. They were transported from the Enchanted Forest and robbed of their original memories by the Evil Queen Regina using a powerful curse obtained from Rumplestiltskin. The town's only hope lies with Emma Swan, the daughter of Snow White and Prince Charming. Suspenseful and sweet, it's the perfect mix for a date night in.

With laughs and girl power, She’s the Man is a flick that your date will definitely like. It's a romantic comedy starring Amanda Bynes as Viola Johnson, who decides to disguise herself as her brother in order to play soccer at his elite boarding school. However, she starts to fall for one of her teammates and finds herself in the middle of quite a few love triangles (seriously, it's complicated). You and your date will be laughing your heads off all night.

This new Netflix original series has been trending since the second it was released. If you and your bae haven't seen it (well, even if you have) it's the perfect TV show to cuddle up and watch together. The sci-fi drama is set in the fictional town of Hawkins, where a 12-year-old boy, Will, has mysteriously vanished. Will's frantic mother searches for him while the police chief launches his own investigation. The best part of the series? Will's daring and brave best friends and their own commitment to finding him. Along the way, the trio discovers a psychokinetic girl who claims to know Will's location. Lot's of mystery, creepy creatures and "say, what?!" moments are what make this series so dope (and the scare factor provides *plenty* of chances to hold hands).

Whether you watch the classic version starring Kevin Bacon or the 2011 reboot starring Kenny Wormald and Julianne Hough, Footloose should be your go-to romantic musical. Ren MacCormack moves to a small town where rock music and dancing are illegal. He bonds with the reverend’s rebellious daughter, Ariel, and, with her help, Ren tries to convince the town that music and dancing aren’t such a bad thing by advocating to have a high school prom. For this flick, get your date on their feet to dance and sing along!

This timeless show is totally bingeable and incredibly hilarious. The show follows the lives of six young adults living in Manhattan as they navigate work, love and other crazy life events with the support—and sometimes teasing—of one another. Watching all 236 episodes on Netflix will cost you 118 hours of your life, but, hey, it'll give you some real #90svibes, and it makes for the perfect light-hearted entertainment for a super casual date(s).

Young and quirky Louisa "Lou" Clark (Emilia Clarke) moves from one job to the next to help her family make ends meet. Her cheerful attitude is put to the test when she becomes a caregiver for Will Traynor (Sam Claflin), a wealthy young banker left paralyzed from an accident two years earlier. The two form an unlikely bond as Louisa tries to show Will that despite his disability, life is still worth living. This love story will set a *major* romantic mood for your date night in.

In this 2015 romantic comedy, frumpy high-school senior Bianca (Mae Whitman) has a rude awakening when she learns that her classmates secretly know her as the DUFF (Designated Ugly Fat Friend) to her prettier and more popular pals. Desperate to reinvent herself, Bianca enlists the aid of Wesley (Robbie Amell), a charming jock who she begins to fall for. The unexpected pairing of Bianca and Wesley will have you and your bae rooting for her from start to finish.

What's your fave movie or TV show? Which one of these do you want to watch with *your* crush?