Jumping ahead of the pack 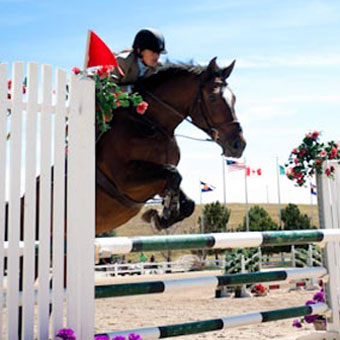 When Channing Seideman was diagnosed with juvenile myoclonic epilepsy, she refused to let life pass her by and give up her dreams. This Aspen, Colo., high school senior, who is both a ski instructor and competitive horseback rider, has found the means — and a four-legged friend — to keep her moving forward. “You have to find the solution,” she says, “because you cannot give up what you love.”

Channing had her first seizure in June 2003. After another struck in November that same year, an ER doctor told her she had epilepsy. She didn’t want to believe it. “I was kind of hoping it was just these two seizures, I’ll be done, I’ll move on. But then they didn’t stop.”

She and her family went to New York in May 2007, where she was formally tested for and diagnosed with the disease. “They told me I would have it [for] the rest of my life, and that’s when it hit me,” she says. “I was just in shock. ... You’re just like, what did I do to deserve this?”

But Channing didn’t let the disease stop her, and with the support of her family and friends, has found innovative ways to continue doing the things she loves. For skiing, it’s a harness that keeps her strapped into the chairlift so she cant’ fall if she seized on the lift. For horseback riding, Channing, who is a competitive jumper, wears a helmet and inflatable vest.

But Channing’s most lovable solution is Georgie, a one-year-old golden doodle from Canine Assistants, a program that trains companion dogs. After having a seizure while riding, an onlooker connected Channing to the program.

The result has been a wagging-tailed helper who’s more than just a furry friend. “[Georgie]’s awesome,” Channing says. “She can go get my meds. She can go get help. And for me, it’s a big relief just waking up to a wet nose and not a strange EMT.”

“She’s become my best friend,” Channing explains, “We have the strongest bond in the world.”

Thanks to her canine companion and the support of her family and friends, Channing is no longer afraid to shoot for the stars with her riding.

“I have this insane dream of going to the Olympics,” she says. For now, Channing is working on getting into elite show jumping competitions called grand and mini prix, a process that could take years. But the goal is simple: “To go to the highest level I can and just have fun with it because it’s amazing. My life revolves around [riding] so much.”

Channing has even more plans on the ski slope. As an instructor, she received level 1 certification from the Professional Ski Instructors of America, a certification that allows her to instruct young kids.

This fall, she will start classes at her community college in pursuit of a veterinary technician degree, an aspiration no doubt shaped by the animals in her life.

As she continues to work toward her goals, Channing knows what to do if things get hard: keep things in perspective. “There are people worse off than me or better,” she says. “But I also consider how fortunate I am with my horsing and my skiing and just where I live. You have to take into consideration the good things over the bad.”

And when that doesn’t work, Channing has one more ace in the hole. “You can’t forget little Georgie!” she says. “Just the look of her will put a smile on your face!”