COVER STORY: The Future is Peyton 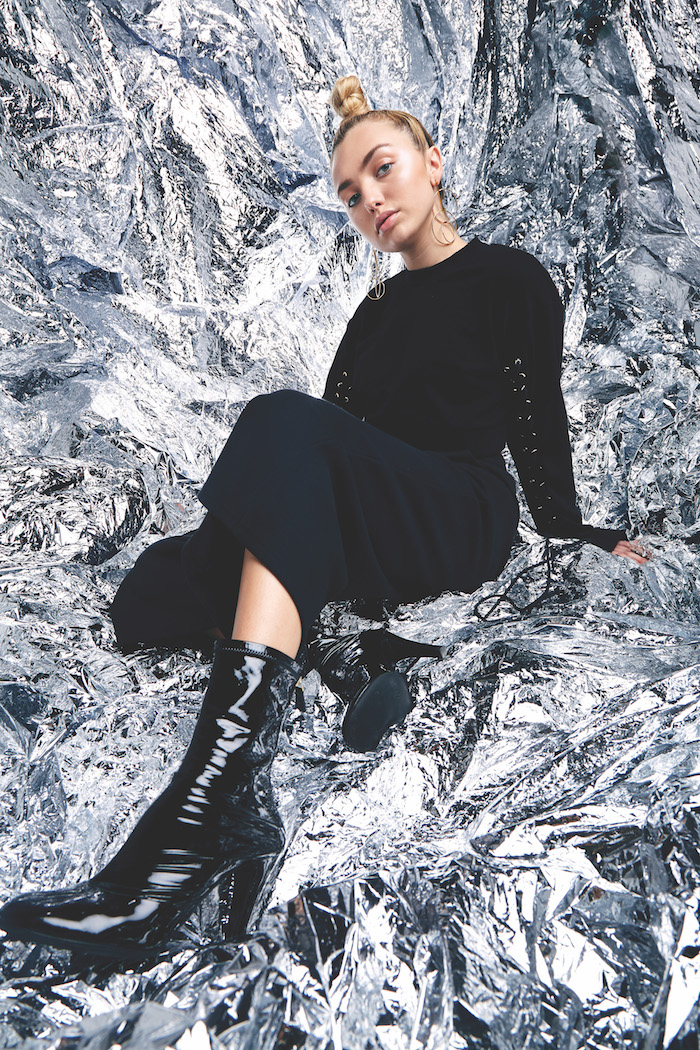 You don’t need to be a rocket scientist to know that Peyton List is headed for huge things. Here, the glam star of Bunk’d and Jessie shows off chic styles...and shares how she’s stepping up her fashion—and acting—game.

It’s cover shoot day at Parlay Studios just outside Manhattan, and Peyton List sits at the center of a style storm. Editors, photographers, makeup artists and assistants are buzzing around her—unpacking clothes, organizing shoes and adjusting lighting. Peyton chills on a leather couch with her mom, sipping kombucha.

The 19-year-old deserves this quick, quiet moment. After all, she just spent a week Ubering all over Manhattan for New York Fashion Week, sitting front row at shows like Carolina Herrera, Naeem Khan and Marchesa.

Today, she’s rocking a much more understated outfit than she did at the shows—where she stunned in a gorgeous floral frock and hot pink silk shorts, among other looks.

At this moment, Peyton is all about all black everything, from her graphic tee to her faded skinnies to her patent leather booties. She’s let her freshly washed mane tumble around her face, which is bare save for a pair of thick frames (those are black, too).

The look—which she calls a “New York uniform”—is a nod to her Brooklyn roots. But she won’t stay in it for long. Soon, she’ll switch from monotone streetwear to styles a bit more sparkly as she models the holiday’s hottest trends.

It’s this ability to transform into just about any look and character that’s made Peyton a staple on best-dressed lists—and one of the most sought-after young actresses around.

CONFIDENCE COUNTS
You’ve probably seen Peyton’s style prowess on her Instagram feed. There, she showcases pics from her Bongo modeling days, red carpet snaps slaying in Carolina Herrera and even images in her favorite vintage mod dress, a piece she thrifted from a boutique near her current home in Los Angeles.

Today, Peyton works her fashion magic in her dressing room on set, adding last-second layers, like belts and chokers, and swapping lip colors. Experimenting with fashion is totally Peyton’s jam—but it hasn’t always been.

Shopping was once a struggle, no doubt hampered by the body shaming she experienced. “People used to say, ‘Oh, you’re so flat-chested.’ They’d even call me SpongeBob SquarePants because they thought I had such a boxy body type,” Peyton recalls. “I used to laugh at it, but now I realize that it was actually really, really mean.”

The body bashing didn’t end there. Peyton found that once people got into her head, it was impossible to push their opinions aside—and she let others dictate the way she dressed, even if the looks weren’t the best for her shape.

“They’d say, ‘That looks great on you, you should buy it!’ and I would... even though I didn’t feel good about it,” says Peyton.

Between hours of fittings for projects and growing into her curves, it hit her: Fashion is about wearing what feels right for you, and you alone.

“If I love it before I go out and then people judge it, I don’t care,” she says. “When I’m feeling really confident, that’s all that matters.”

DESIGNS OF HER OWN
At NYFW, Peyton watched as meticulously detailed and planned showcases unfolded in front of her eyes. Music played, cameras flashed and models rushed by in decadent dresses—and Peyton loved every minute.

“So much goes into these pieces,” she says. “They’re putting the finishing touches on them until the last few moments and once this show is done they start planning an entirely new collection. I can’t imagine how exhilarating and exhausting that is.”

Just as quickly, though, Peyton’s style and tastes can change. Some- times she reaches for basics, other times she’s all about the color. How she dresses depends on the occasion—or where she is in the world.

Take Hong Kong, for example, where Peyton says that everyone is so effortlessly put together. “I took a trip there recently and it was beyond fun. I felt like I could take more risks and be a girlier version of myself. I wore so many skirts and tons of color—definitely lots of pink!”

During Fashion Week, Peyton eyed plenty of looks she’d love to have in her own closet—like Naeem Khan’s Russian ballerina-inspired presentation (“lots of tulle and soft colors,” she gushes) and Carolina Herrera’s ’80s-inspired line (“big shoulders and polka dots— so vibrant!”).

But it was Marchesa’s collection she adored the most. “The draping pearls and tulle were to die for—I would wear anything from that show,” she says.

It wouldn’t be a stretch if, one day, the fashionista decided to design a line of her own.

Not only is Peyton fascinated by the design process, she also believes that there’s a lack of variety when it comes to options for teen girls. “I feel like younger girls get left out when it comes to clothes. You’re not a little kid, but you’re also not a woman, and I think it’s really difficult to find great pieces,” she says. “Designing something for teens that’s classic and cool, that also makes girls feel good about themselves, would be really fun.”

CAMERA READY
With film, TV, comedy and drama already under Peyton’s belt, it’s clear that she applies the same “try anything” approach from fashion to her acting career.

Next year, she’ll take on her first big drama with Anthem. In the feature film, she portrays Faith, a girl who falls for her prophet classmate, Luke (Cameron Monaghan), after he foresees the death of his best friend, Stan...who also happens to be her boyfriend.

“It’s heavy and complicated,” Peyton admits of the movie based on YA novel Anthem of a Reluctant Prophet by Joanne Proulx. “Faith and Luke end up coping together and falling for each other at the same time, even though they definitely shouldn’t be having these feelings.”

Behind the scenes, Peyton and Cameron caught feelings for one another, too. Between long days on set and emotionally draining scenes, Peyton says they bonded a ton. After a fun night of karaoke with the cast in the tiny Canadian town of Kelowna, Cameron sent a simple and sweet text asking Peyton out to dinner.

“I was freaking out, like, ‘Is this a date? No—there’s no way!’” Peyton spills. “We had only been going out as a group with the cast, so I figured this would be the same. When I got there, it was just us—and we really hit it off.”

Other things are taking off for Peyton, including her career. After Anthem, she’ll sing and dance as Courtney in the musical remake of the ’80s hit Valley Girl.

She’ll also get funny with The Vampire Diaries alum Nina Dobrev as Ashley in Departures. Toss in more seasons of Bunk’d and Peyton’s one busy babe.

Three films and one TV show could overwhelm anyone, but Peyton takes being busy in stride. “I love exploring amazing characters,” she says of her blossoming career. “I hope I stay on this roll.”

Something tells us that with her talent, instinct and style, Peyton’s going to do just that.

A version of this story appeared in the December/January 2018 issue of Girls' Life.