Ever since TikTok took off and catapulted its creators to immediate celeb status, followers have used the app for major fashion inspo. No one on the app serves fiercer looks than the TikTok queen herself: Charli D'Amelio! Those who have been following Charli since the beginning have noted her recent style changes, and we decided to look back at her complete transformation over time.

Charli's first viral TikTok was way back in July of 2019 when she duetted another creator in an "easy dance." Her black leggings and hoodie are simple and comfortable, and she completed the look with some fun braids and a bright smile that instantly made us all *obsessed* with her.

##duet with @move_with_joy this is so cute i love this

When Charli first joined the hype house in December, she participated in a photoshoot where the creators sported jeans and white tops. Her love of crop tops is featured here with this casual yet striking look—a style that would become her staple over the next several months.

She absolutely *slayed* in the bright blue bodycon dress that she wore to an event in February. Everything about this outfit was perfection, from the sparkling earrings to the dress' slit and the epic dance moves that she rocked while wearing it.

decided to get dressed up today

Charli loves bright colors and fully embraced the tie-dye trend, frequently sporting this cute pink tank in her TikToks. It seems that Charli's wardrobe during this phase of her social media career included lots of basic jeans and short tops in fun colors and cuts. Also, can we point out how *fab* her hair looks curled?

This chic all-black look complete with a Gucci belt and whispy ponytail is almost as iconic as her and Chase's sweet dance moves.

quite a throwback @lilhuddy

When Charli jetted off to Paris at the end of February, she was styled by Prada in a way that perfectly captured her signature style and added some designer elegance to it. I think we can all agree that we didn't expect dress pants and a cropped sweater to pair so perfectly, but of course, Charli rocks it!

idk who made this dance but i love it

♬ ready or not - zое

The D'Amelio family spent most of this spring at their Connecticut home in quarantine, where Charli's daily 'fits included a *ton* of cozy sweatpants paired with fun sports bras. Her new, shorter haircut was frequently in ponytails and other casual and natural styles. She also began to further accessorize her outfits with trendy chunky hoop earrings and wore her glasses more frequently (same, girl...bc who wants to bother with contacts when you can't leave your house?)

At some point during the summer, Charli and her family bought a home in LA with *tons* of amenities including a gorgeous swimming pool. She then began posting TikToks of herself dancing in the cutest swimsuits like this red one with a sarong.

Just a couple of weeks ago, Charli went through a *major* hair transformation that no one saw coming when she dyed it partly blue! She also debuted a hint of a new look—one that is slightly edgier and a departure from the cutesy pastels that she rocked at the beginning of the year (and can we just say, we are absolutely *living* for this new style!)

Again, Charli chose an all-black fit for one of her most recent TikToks. However, this look is definitely more comfort-focused and helped make her dance moves look even cooler. She absolutely killed this routine, and the combination of butterfly-printed sweatpants and classic black Converse completed the vibe.

Which of Charli's looks is your favorite? Tag us @girlslifemag on TikTok so we can check them out, and don't forget to follow us! 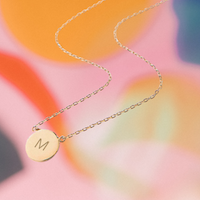 Minimalist *and* meaningful? AMYO just gets it.
Enter to win here!