5 things we'll miss most about Make It Or Break It 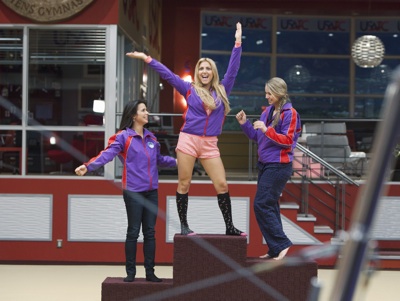 The series finale of MIOBI is happening Monday night, May 14, at 9 p.m. ET/PT on ABC Family. Will you be tuning in? It might be ending, but we’ll never forget all the amazing characters and storylines this show has had, particularly with this past season.

There’s a cute, new boy for Pay. Lauren started to be less Lauren-y, but then she found out she happens to have a serious heart condition. The sweet Kaylie is finally in a good relationship. Plus, she said, “I love you,” for the first time! KP turned herself around, became nicer and stood up to her awful mother.

Above all that, there are some additional things we’ll really gonna miss, like…

Living the life of a gymnast through its characters

Every week, MIOBI viewers got to pretend they were gymnasts themselves by getting a peak into that crazy, but awesome, world. Watching this show made gold medals seem not that absurd. Dreams seemed a bit more accessible. Life seemed a bit more cheery. Sigh. We’ll miss those amazing routines.

When we first met Lauren, she was a rude, backstabbing girl. Who are we kidding, she was like that all the way up through the beginning of season three! Maybe it took her a while to get her stuff together, but her newfound friendship with Payson this season helped her to put everything into perspective. We’ll sure miss watching Lauren transform into the kind, good friend we all knew she had the potential to be.

The ups and downs of the relationship between the three besties

When you train together as much as Kaylee, Lauren and Payson have, there are bound to be hurdles along the way to the Olympics! Each girl wants to be the best. Each girl wants the best guy. Each girl wants the most attention. But when it comes down to it, each girl wants their best friends. That’s why, no matter what has come between them (see: boyfriend-stealing, blackmailing, name-calling, gold-metal competing, letter-stealing, sabotaging), they will come out the other end as buds. We’ll miss watching them grow, both personally and as an unbreakable trio.

As Rock gymnasts, they weren’t allowed to date. But that obviously didn’t stop them! Kaylee dated Carter, who broke her heart when he started sneaking around with Lauren. Emily had a flirty thing with Razor, but then ended up with Damon in this forever love thing, which started coming to an end when Damon started hangin’ with Kaylee and she started to like him and he started liking her. But then Emily got preggerz, so Damon and she had to deal with that! Payson always said she’d steer clear of boys and keep her eyes on the gold-medal prize, but then she hurts her back and has to go to a normal high school where she meets Ike. They hang out for a bit, but then it’s back to the Rock for her! So much boy drama and we don’t want it to end!

You can’t have a show without a classic mean girl. Lauren was always mean, but all she ever wanted was to be loved by her mom, or a mother figure. KP was rude to everyone because she blindly followed what her extremely rude mother told her to do, until she caught the nice-bug and kicked her mom to the curb. Jordan always says she isn’t at the gym to make friends so she’s a snob to everyone there. And Wendy? Wendy is one of those characters you always have to watch out for. She is too bubbly, sweet and seemingly naïve. In actuality though, she is the most conniving, sneaky character of the bunch. Sure, we don’t want these sorta girls in our own lives, but we can’t get enough of watching them play out on the screen.

Be sure to tune in to Make It Or Break It’s series finale this Monday night at 9 p.m. ET/PT to find out which girls will be going to the Olympics they have been training for their whole lives.

What are you going to miss most about MIOBI? about it, babes.

POSTED IN entertainment, television, Freeform, Make It or Break It