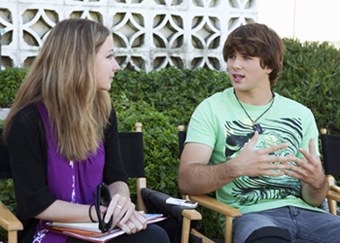 And what’s in store for the teen BFFs this go around? GL’s Assistant Editor, Trish McNamara, got a chance to hang with the cuties on the show’s L.A. set (right by the beach!) as they filmed a new episode for Season 2.

Catch-Up: Have no idea what the show’s about? It follows lifelong buds Zeke and Luther, who will do whatever it takes to try and become world famous skateboarders. Always skating towards mischief, the series follows the pair through interactions with family and rivals, among other crazy adventures. 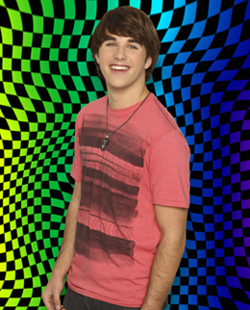 Meet…the real-life Zeke. A born leader, Zeke (played by Hutch Dano) is just like any typical teen: He has a messy room and must deal with his little sister’s antics. But is 17-year-old Hutch as charming as his TV counterpart? We sat down with him to find out…

GL: What’s your favorite thing about Zeke?
Zeke is very serious. He’s very focused and passionate about skateboarding. He pursues his dream [of being] a world famous skateboarder every day and I’ve always been a fan of someone who just really, you know, goes for it. I just love his passion.

Are there any similarities between the two of you?
He can be a little too serious sometimes, to the point where it’s good that Zeke and Luther are friends because Luther’s not serious enough. So they really balance each other out, but he’s very passionate about skateboarding and I feel the same way about acting. It’s something that I want to do for the rest of my life, the same way Zeke wants to be a skateboarder the rest of his life.

The show centers around guys, but what’s the sweetest thing you’ve done for a girl?
My mom makes jewelry and one time I paid for a necklace from [her]. I had her make this really nice necklace with this locket and everything and I gave it to [this girl] for her birthday. She liked it—well, that or she was pretending to like it. If she didn’t, then I got fooled.

I love watching Gene Simmons Family Jewels. I love KISS. My step dad got me into them. I listen to all their music and when [Gene] came out with his own reality show, I recorded every episode. I’d say that’s not a bad [thing], but you don’t tell everyone that you watch Gene Simmons Family…well, I just did. Cat’s out of the bag now. 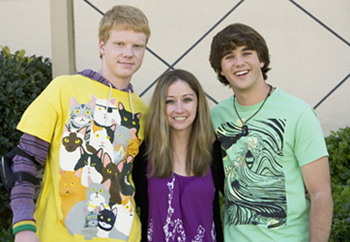 Trish in a Zeke (Right) and Luther (Left) Sammie

What’s one thing people might be surprised to know about your costar Adam Hicks, who plays Luther?
Everyone who knows him or knows about him knows that he raps, but most people who first meet him are usually surprised [by that] because of the character he plays. He raps, and he’s really good at it. I’ve heard a bunch of his songs and when he freestyles, he’s really, really good.

What’s the craziest thing the two of you have done together?
We’ve stayed up ’til 3 a.m. one time while he freestyled and I tried to freestyle. And I failed miserably. I was like, “I gotta get this. How do you rhyme this and how do you rhyme that?” and he would just shake his head. And then it became three in the morning and I went, “Alright, you know what? I’m not a quitter, but I’m gonna be a quitter.”

OK, final question: If you could be born in any decade, which would it be and why?
It would have to be in the 50’s when Marlon Brando performed A Streetcar Named Desire. Actually, no. Probably the 30’s so [I would] at least be old enough to appreciate it. If I was a baby and my mom took me to see A Streetcar, I don’t think I’d know what was going on. I’d have to be around 16 or 17 [to remember], so I’d say in the 30’s.

Be sure to catch Hutch and the rest of the gang when Zeke and Luther returns Monday, March 15, at 7:30 p.m.

What’s Zeke’s best bud Luther like in real life? Check back tomorrow for our exclusive interview with Adam Hicks to find out!