Bleu waves are hitting us again! 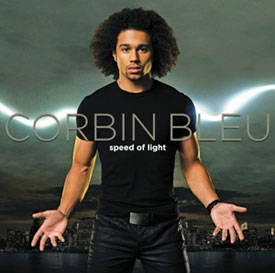 On the airwaves that is. Almost two years after the release of his first solo album, Corbin Bleu is back on the music scene.  Who can blame him for the long break after his busy schedule as a HSM star and other successful movie projects?


But being a triple threat as a singer, actor and dancer, doesn’t seem to be enough for Corbin, adding music writer to his resume after this upcoming album. He co-wrote two of the tracks, “Champion” and the very special “Moments That Matter”--a personal fave of ours!). When we last spoke with Corbin, this is what he had to say about “Moments That Matter”: “I wrote that song on my 19th birthday. I was in the recording studio and didn’t have an opportunity to see any of my family or friends. But they called me. I got a lot of messages. A lot of kind things were said and I was feeling really good so I started to write a song about it. That song wraps up everything that matters most to me in life.”

The album, titled SPEED OF LIGHT, features producers and writers who have worked with the likes of Kanye, Britney and Michael Jackson. Throw Corbin’s powerful vocals into the mix, as well as upbeat rhythms, and we guarantee you’ll never stop swaying to the songs!

SPEED OF LIGHT is the perfect CD to give you that extra burst of energy during the day or for getting ready for a night out with the girls.

“Fear of Flying,” also on the album, was recently featured in Corbin’s latest flick Free Style, where he played a motor cross racer looking to win an Amateur Championship.

For those of us who can never get enough of those HSM hotties, be sure to check out his album when it’s released on March 10.

Let us know what you think!